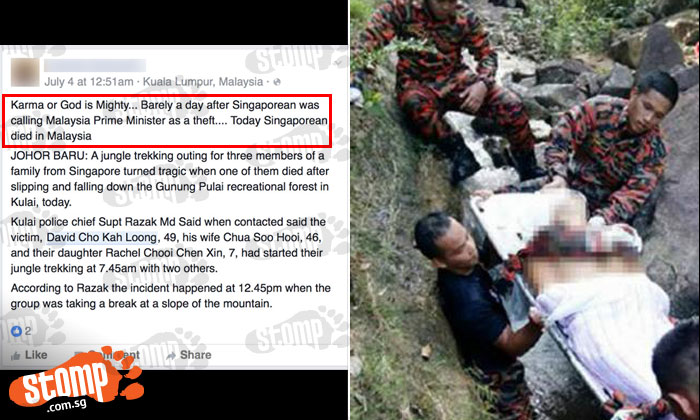 Stomper RW lashed out at a  Facebook user he believes has posted a 'senseless and wicked' comment with regard to the death of 47-year-old Singaporean David Cho in Malaysia.

In the post, the netizen described the Singaporean's death as 'karma'.

"Karma or God is mighty. Barely a day after a Singaporean called Malaysian Prime Minister a thief, a Singaporean died in Malaysia."

David Cho died on Jul 3 after he fell 20m from the top of a waterfall and hit his head on the rocks below while trying to save his 7-year-old daughter Rachael, who had slipped.

According to The New Paper, he had been trekking with his wife, Madam Chua Soo Hoon and their daughter at the Gunung Pulai Recreational Forest near Kulai, about 40km from Johor Baru when the tragedy occurred.

Said RW about the netizen's comments:

"Was reading a couple of articles about David Cho, the father who died trying to save his daughter at a waterfall when I came across this posting in Facebook.

"A person has died and he calls it karma??

"What has what happened to David Cho got to do with what some comedian said about the Malaysian Prime Minister?

"What a senseless and wicked comment to make about someone who just died trying to save his daughter!"

*Parts of the netizen's comments have been edited for grammar.