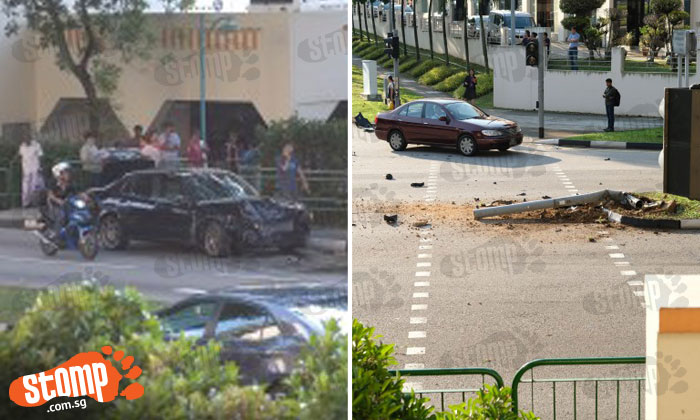 Stomper Alex was filming some cats yesterday (Jul 28) near Sin Ming Road when he came saw an accident at around 5.35pm.

The Stomper is unclear what exactly happened, but he reported hearing a loud screeching sound followed by a crash prior to the accident.

Photos sent by the Stomper shows a fallen traffic light as well as a black-coloured car parked at the side of the road with a damaged front bumper.

The Stomper recounted what happened in an email:

"As I was nearing the site, I saw smoke. I believe it is caused the screeching tyres.

"There were passersby rushing to the scene, near where the car was.

"Based on the the calmness of the onlookers, I believe there was no one injured.

"Sin Ming is a place where a lot of vehicle servicing centres are located.

"Thus, there are a lot of vehicles around the area.

"Pedestrians and drivers passing by that area should be careful."