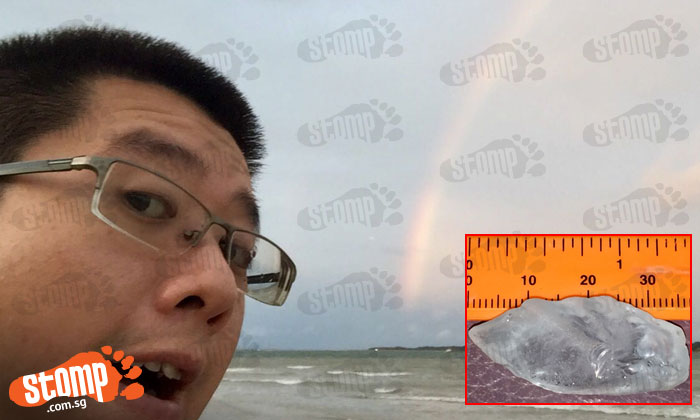 Stomper Lau Lup decided to spend his Friday (Dec 30) at Changi Beach, and even witnessed a rainbow near car park 7 at around 5pm.

Hoping to witness the spectacular view with his wife the next time, Lau Lup brought his boo down for a stroll at Changi Beach on New Years Day -- but they explored a different part of the park this time (between car park 1 and 3).

"We were hoping to catch the rainbow if we were lucky, but there were none that day.

"While we were walking along the shore, I then spotted a glistening object on the sand.

"I am not too sure about what I have found, and I'm also unsure if this is semi-precious, or just something cheap."

According to the Stomper measurements using the vernier calipers, the glistening object is about 3cm long.

"I personally think that it's a good omen for the coming year.

"And I am considering to make this into a pendant as a gift to my wife for the New Year."

What do you think the glistening object is?