Still no excuse for violence: Attacker in viral video of boy being beaten up says, 'He insulted me and my family' 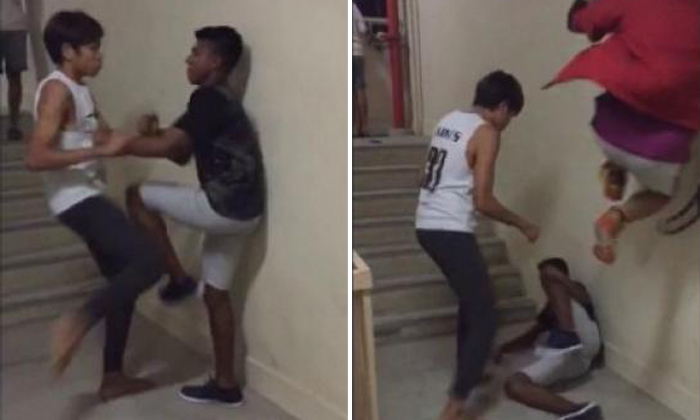 Parties involved in an incident where several youths bashed up a boy at a staircase landing have since spoken up about the incident and given their sides of the story.

Stompers Veera, Raez, Zianna, Kenny, Nasslina, Esther, and Helene had earlier alerted Stomp to a video that showed the group raining blows on one person.

In interviews with The New Paper, both the attacker and victim have now revealed more about the dispute.

Here is the TNP report by Zaihan Mohamed Yusof, reproduced in full:

A recent video clip showing a teen being beaten by two other boys at a staircase landing has sparked online outrage over bullying.

But there is more to the case than meets the eye, The New Paper learnt yesterday, after speaking to the victim and one of his attackers.

The incident occurred at about 10pm on Saturday, on the eighth storey of a block of flats in Potong Pasir.

The 22-second video clip begins with a teenager in a red shirt punching a boy in a black T-shirt who does not retaliate.

The victim tries to shield his face and body. But he is later struck repeatedly by a boy wearing a white hockey jersey emblazoned with Saints 33 on the back.

At one point, the boy in red is seen leaping through the air to stamp on the victim, who is on the floor and screaming in pain.

As of midnight yesterday, the clip had received more than a million views and 36,000 shares on Facebook.

Most of the netizens called for the attackers to be brought to justice.

Though the boys involved have been identified online, TNP is not doing so because they are minors.

When TNP met the victim and his mother in their flat in Potong Pasir yesterday, he said that he hung out with a group while his attackers belonged to another group.

He knows his attackers, who go to a different school, because they grew up together in the same estate.

He said he was still in pain from his injuries in the attack.

Showing TNP his swollen left thigh and superficial injuries on both knees, the Secondary 2 student said: "There was no point fighting back, I was outnumbered."

Clarifying that it was not a case of bullying, he said he had met his attackers to settle "some issues", but declined to elaborate.

The boy, who gave a statement to the police on Sunday, added: "I'm not angry at him (the boy who stamped on his left thigh). It has already happened."

The attacker in the hockey jersey told TNP over the phone yesterday evening that the victim had been provoking him.

Insisting that he did not belong to any group, the Secondary 3 student said: "I know I lost it (when I attacked him).

"But he kept boasting he belonged to a big group. And he also said insulting things about me and my family."

The attacker claimed that the victim had told him he could mobilise 20 people to their meeting and "confirmed I would die".

So he called five friends to join him, expecting to meet a huge group. But the victim turned up with only two friends.

Only the three teens in the video were involved in the incident. The others only stood and watched.

He said that after the attack was over, he asked the victim if he was "okay" .

"We grew up together playing basketball and football. I knew he has a back injury," he said.

The injured boy limped to the lift with his friends' help while the teen in the jersey took the stairs alone.

His friends also left, and some of them even took the same lift down as the victim and his friends.

The principal of the attackers' school said she was "aware of the incident and that some of the students involved are from our school".

She told TNP in an e-mail: "We take all incidents of fighting seriously, and will continue to educate our students on anger management and appropriate behaviour.

"The school is working with the police in their investigation and therefore is unable to comment further."

The Ministry of Education also said it was aware of the incident, but was unable to comment because of the police investigation.

The victim's mother told TNP she was shocked when she learnt the next day what had happened.

She claimed the attacker in the jersey had visited her flat to "ask for the matter to be dropped".

When told of this, he claimed it was not true.

He said: "On Monday, I went to apologise to the victim and his mother. A woman at the door told me not to contact them any more as it was now a police case."

He said he had given two police statements so far.

One of his schoolmates, who had gone to watch the "settlement talk", said the police had also called him to give a statement.

He told TNP: "I was playing basketball in the estate when I stupidly agreed to accompany the boys to the meeting. I didn't know (things would) happen like that."

In reply to TNP's queries, a police spokesman said: "The police take a stern view of lawless and violent public behaviour, which could threaten the sense of safety and security in the community.

"Any person who resorts to violence and riotous behaviour will be dealt with severely, in accordance with the law."

VICTIM'S MOTHER: SON NOT ALLOWED TO GO OUT NOW

Two parents living in a Potong Pasir estate are in shock after learning of their sons' involvement in last Saturday's incident.

The teenagers had grown up playing football and basketball together.

But their friendship took a beating when one of the teens was attacked by two boys known to him.

The other teenager has been called up by the police because he was there where it happened.

The victim's mother said she was terrified when she saw part of the video clip of her son being kicked and punched.

She said: "I learnt of the incident only a day later because my son didn't want to tell me what happened to him. Now, we keep our doors closed and I have ordered my son not to go out."

The 55-year-old father of the other boy has banned him from going out or contacting his friends.

The man, who learnt of the incident only yesterday morning, said his son was "not thinking properly".

"I told him not to be stupid and never to follow others for no reason, especially if there's going to be a fight. I hope his school will pay more attention to what boys are capable of these days."

The worried father said his concern stems from an incident two years ago when his eldest son was stabbed by a secondary school student.

Regardless of what reason there might be behind a dispute or how angry you might, violence should not be the answer.

Do you think the attacker was justified in using violence in this instance?

How do you think both parties could have better handled the situation?

Share your thoughts with us in the comments below.