Steady lah, say netizens after rider gives woman a piece of his mind when she allegedly jaywalks in Sengkang -- then films him 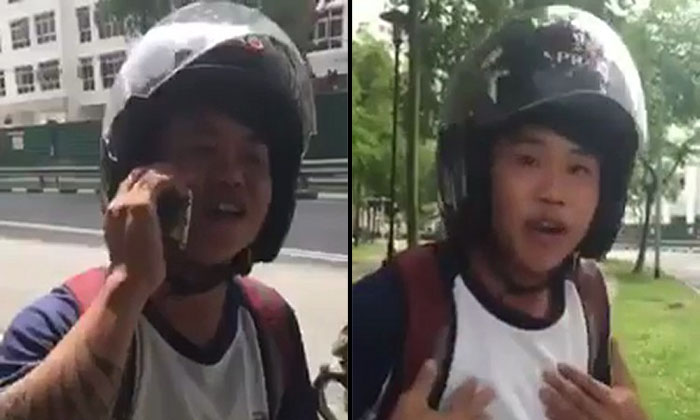 A video of a motorcyclist arguing with a woman who filmed him after allegedly jaywalking in Senkang Compassvale Crescent has gone viral recently.

The clip was posted on All Singapore Stuff, and has become a talking point among netizens.

It shows a the rider arguing with the woman in Chinese after a near-accident.

The rider tells the woman that she was jaywalking.

He can be heard saying, "Come I help you call the police? What you want to tell them? You cross the road and then say I don't know the rules."

He then calls the police to explain to them that he nearly got into an accident because the woman had crossed without checking for oncoming traffic."

He also explains that he does not want the police to come to the scene as it is a small matter, but wants to inform them about the incident as the woman was allegedly making a big fuss.

After the call ends, he argues with the woman in Chinese.

The following is a translation of the conversation between them:

Man: Your turn to call the police la. Call la. I already called. You don't dare to call?

Woman: You wait here, you scolded me just now.

Man: You go back to your country if you want your rules. Yes I am scolding you. Did the road I was turning out from have a zebra crossing? You did not even look before crossing the road.

Woman: I was already crossing the road.

Woman: So you are still scolding me now?

Man: You did not even bother to look left and right before crossing. Lucky I saw you and stopped. If I did not see you I would have hit you.

The man then turns to his bike, which prompts the woman to ask, "Why are you leaving? Haven't you called the police?"

Man: I called them already. Now your turn to call. You ask them to come down la.

Woman: I will be waiting here

Man: Yes film me. Film and put on the internet.

Woman: Sure I will definitely do it.

Man: We will see who is right and wrong

The man then explains that the woman crossed at a non-zebra crossing spot and that he had the right of way.

He then sarcastically welcomes her to Singapore, before showing the middle finger and muttering a vulgar phrase.

Most netizens who commented on the video praised the rider for calmly handling the situation and giving the woman a piece of his mind.