SQ plane turns back to Changi Airport after leaking oil, then bursts into flames while landing 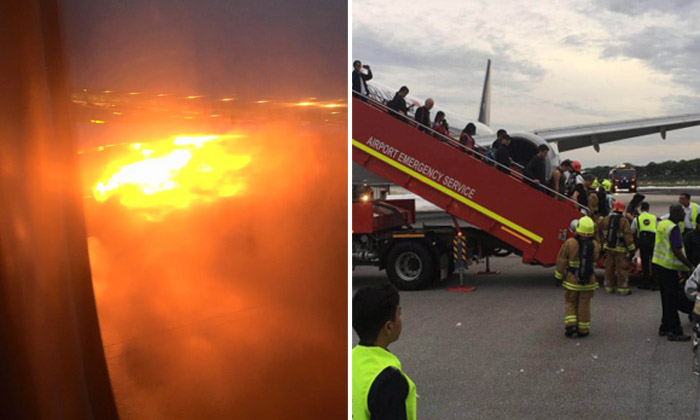 It was a fiery fright for passengers on board a Singapore Airlines plane when it burst into flames at Changi Airport this morning (June 27) after turning back due to an oil leak.

Stompers Vincent, Kenny, William, Alan, Amiril, Kevin and Carol all sent in contributions about the incident.

Flight SQ368 with 222 passengers and 19 crew on board, departed Changi Airport Terminal 3 for Milan, Italy, at around 2.05am on Monday.

Ms Lee Bee Yee, 43, shared her harrowing encounter on Facebook page premiummall.sg at about 7.40am:

"Our Singapore Airline plane was leaking oil 3 hours flying off and the plane had to turned back. After reaching Changi Airport, as the plane was landing, the engine burst into flames!!!! Huge fire was burning! See video!

"It was a heart wrenching 5 mins! Waiting for the fire engine and fire fighters to put out the fire! They shot foam and water into the fire and eventually it was put out! We were so close to death!! I am still in the plane with all passengers. But I think we are safe for now....they will be evacuating us soon."

Stompers William, Kenny and Alan saw the plane on fire while driving by.

"The fire looks like coming from the engine releasing a lot of black smoke."

A Singapore Airlines spokesperson told AsiaOne that the flight had an engine oil warning message.  The Boeing 777-300ER aircraft returned more than three hours later after the pilot detected an engine fault.

According to passenger Ms Lee, the plane landed back at Changi Airport at around 6.45am. Shortly after landing, the plane's right wing caught fire.

"The pilot then informed us there was a leak, and that the plane would have to turn back to Changi Airport as it did not have enough fuel for the journey," said Ms Lee.

"The blaze was quite fierce and we waited for around two to three minutes before the fire engines arrived," she said.

"All the passengers were surprisingly quite calm."

According to The Straits Times, there were no injuries but travellers booked on other early morning flights faced some delays as Runway 2 where the plane landed remains closed.

SIA said the right engine of the plane caught fire after the plane touched down at Changi aircraft at 6.50am.

Passengers disembarked through stairs and were transported to the terminal building by bus.

The flight to Milan will depart at 9.30am on Monday.

In a notice handed out to all passengers, SIA apologised for the incident and said arrangements had been made for light refreshments while passengers wait for their flight.