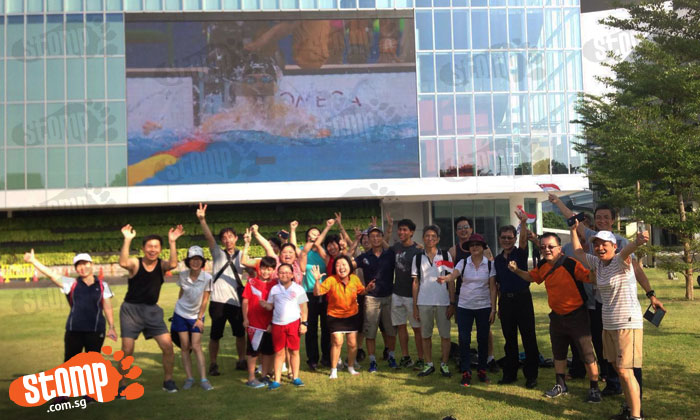 Unlike many of you who watched the swimming event at home, a couple of Stompers catched the race outdoors with friends and shared their experiences with us.

Stomper Evelyn was leading a walking tour in One North when she heard that Schooling's 100m Butterfly event will be shown on a huge screen outside Mediapolis.

The group of around 20 people then headed over to the building at 9.15am to cheer on the 21-year-old.

Said the Stomper in a WhatsApp message:

"We managed to get a good view of the race.

"After seeing Joseph Schooling come in first, we jumped for joy and shouted our hearts out.

"We also sang the National Anthem together with him during the awards ceremony.

"It was really a good experience getting to witness this momentous event as a group in an outdoor setting!"

The group of around 40 to 50 people watched in excitement once the event started.

Cheers and screams then filled the tuition centre after the race concluded with Schooling coming in first.

We hope the Stompers and their companions had as much fun watching the young Singaporean clinching the gold medal as we did!