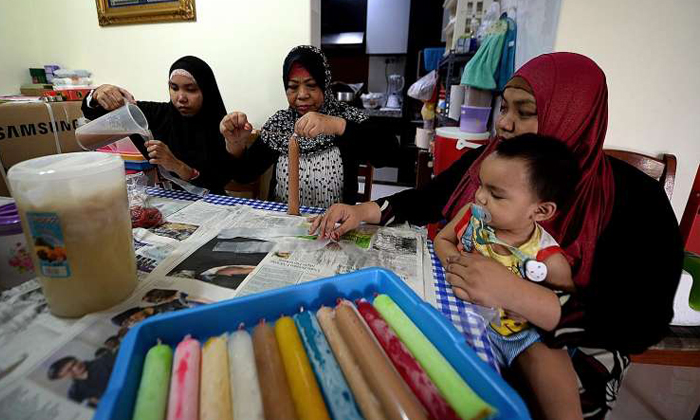 When 57-year-old Salbiah Ahmad found out last month that she could soon be matched to a kidney donor, she came up with a cool way of raising money to offset the costs of her looming transplant.

She has since sold more than 1,000 ice lollies as word spread in her neighbourhood and on social media about the nostalgic snack, known as air batu in Malay.

Madam Salbiah makes them in an array of colours and flavours, including bandung, lychee and sour plum.

Speaking to The Sunday Times at her son's three-room flat in Sengkang on Friday, Madam Salbiah said she had decided on selling ice lollies as this did not require much capital. She also keeps them less sweet, so that they can be eaten by both young and old.

"Even though I am still not earning much now, spending a few hours every day making this and having customers tell me that they enjoy the flavours I come up with makes me happy, and helps me forget my worries."

She had been depressed when she found out in 2010 that she had kidney failure and needed dialysis. She is not sure what condition caused her kidneys to fail.

Though her thrice-weekly visits to a National Kidney Foundation dialysis centre cost her only $50 a month after subsidies, her family struggled with her medical bills because of other complications.

Madam Salbiah's medications can cost over $1,000 for three months' dosage as her kidney failure also led to a skin condition. She also has asthma.

Her two sons and daughter, aged between 27 and 32, have been supporting her.

Madam Salbiah's illness is also not covered by health insurance, and while they have tried applying for financial assistance through various schemes, they usually do not qualify for long-term help because they have exceeded the per capita income limit.

She said: "We get help for a few months, but then it stops."

In her household of five, her elder son is the sole breadwinner, earning about $1,500 as a forklift driver. Her husband, 57, a former security officer, is her main caregiver, while her daughter-in-law is a housewife who looks after her nine-month- old granddaughter.

The $800 to $900 that she has raised is still far from the estimated $45,000 that her transplant would cost, before any subsidies.

The call from Singapore General Hospital in December that notified Madam Salbiah of how she was one of the next few people in line for a transplant came like a ray of hope.

"My mother was worried about money but she usually keeps her thoughts to herself. After the call, she held a family meeting and told us that she wanted to start this small business because she didn't want to depend on anyone," said Ms Siti.

They had initially objected to it, fearing that working in between days when she had to go for dialysis would make her tired. But they relented after seeing how her spirits had brightened up.