S'porean Tiffany Teo set for ONE Championship debut at ONE: DEFENDING HONOR 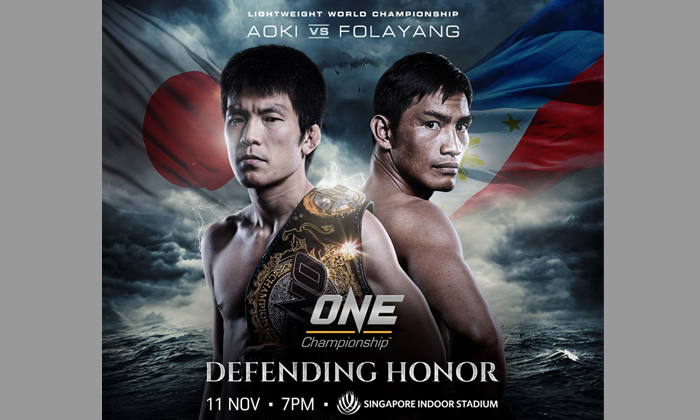 The largest sports media property in Asian history, ONE Championship™ (ONE), has just announced three additional bouts at ONE: DEFENDING HONOR to complete the blockbuster fight card.

The event is set to take place at the Singapore Indoor Stadium on 11 November.

Tickets for ONE: DEFENDING HONOR are available at http://www.sportshub.com.sg/sportshubtix/Pages/one-defending-honor.aspx

26-year-old Tiffany “Soul Crusher” Teo is a female mixed martial artist who is set to make her ONE Championship debut in the promotion’s flyweight division. She holds an unblemished professional record of three wins and no losses, knocking out two opponents and submitting one. Born in Brunei and raised in Singapore, Teo began training in Taekwondo at age 19 before moving on to compete in Muay Thai and eventually transitioning to MMA. Teo is set to make her first appearance inside the ONE Championship cage against Walaa Abbas.

“It is an honor for me to compete in ONE Championship. I am very blessed to be in the position that I am, ready to give it my all and take it one fight at a time. I’m also excited to perform in front of my friends and family in Singapore,” Teo stated.

Walaa “Katyusha” Abbas of Cairo, Egypt is a 32-year-old female fighter currently competing in ONE Championship’s flyweight division. She is a former Egyptian Boxing Champion who made the transition to mixed martial arts in 2012, joining ONE a few years later to take on top contenders Ana Julaton and Ann Osman. She now returns to the ONE Championship cage to go up against Singaporean female MMA prospect Tiffany Teo, who is making her promotional debut.

Unbeaten young Singaporean mixed martial arts prospect Benedict Ang owns a professional record of three wins and no losses. The 20-year-old hones his craft with world-class teammates as a member of the mighty Evolve Fight Team based in Singapore. At his best, Ang is a dynamic striker with a solid grappling skill set. In his last bout, Ang stopped Filipino Jimmy Yabo via third round technical knockout. He now takes on Ahmed Mujtaba in a featherweight contest.

Ahmed “The Wolverine” Mujtaba is a Pakistani mixed martial artist set to compete in ONE Championship’s stacked featherweight division. He owns a professional record of five wins and no losses, with all of his wins coming by spectacular finish. He is known for his tremendous grappling technique which has led to four submissions out of five total victories. Mujtaba is ready to make his ONE Championship promotional debut against local hero Benedict Ang.

Singaporean flyweight prospect Niko Soe is 23-year-old with a 2-1 professional mixed martial arts record. He possesses a well-rounded skill set complete with a great kickboxing base and a capable ground game. Making his first appearance inside the ONE Championship cage, Soe will look to impress his hometown crowd by claiming victory in spectacular fashion. Soe is set to do battle against Malaysia’s Muhamad Haidar.

22-year-old Muhamad “The Rising” Haidar of Selangor, Malaysia is a professional mixed martial artist competing in ONE Championship’s deep flyweight division. He is a Selangor State Boxer who has trained extensively in boxing, Muay Thai and wrestling. Haidar will make his return to the ONE Championship cage opposite local fighter, Singaporean Niko Soe in a three-round flyweight contest.

Related Stories
Female fighter proves why you shouldn't let your man tell you not to fight
Realife: MMA world champion Angela Lee shares the battles she had to win outside the cage
More About:
mma
ONE Championship
sports