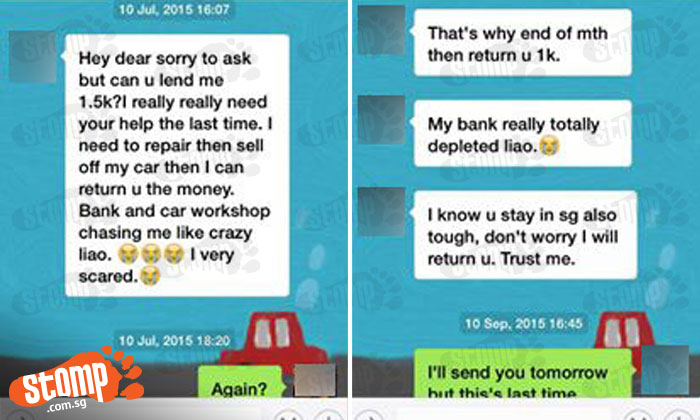 Stomper JC reported that her friend has been avoiding her after she lent him a total of $3,500 to settle a payment for a car accident he was involved in in May 2015.

The Stomper is pregnant and told Stomp that her friend promised to return the money before the end of this year when she gives birth.

She recounted what happened in a Facebook message to Stomp:

"I was helping him after he got into a car accident in Jurong in May 2015.

"Currently he has stopped using his handphone, WeChat and WhatsApp.

"Last month when we were still in contact, he promised to return the money before I give birth to my son at the end of the year.

"I have no idea what I should do anymore."

JC has sent Stomp a series of texts she exchanged with her friend since last May. The texts show the Stomper's friend asking her for money on a few occasions and promising to return it.

Despite what has happened, the Stomper has been trying her best to remain optimistic.

"I need to think positive and won't allow 2016 to be a 'suay' (unlucky) year for me. It's the first time becoming a mother. I can't wait for it and I am looking forward to hugging and touching my baby's face", said JC.