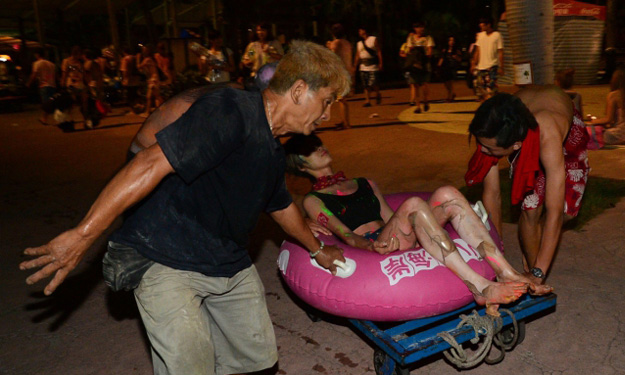 A Singapore woman is among the 524 people injured in a fire that erupted during a party in a Taiwan water park, which might have been caused by a coloured powder thrown on the revellers, reported the Taiwanese media.

Megan Loy, 21, was hospitalised in an intensive care unit (ICU) in Taipei's Shuang Ho Hospital, with burns on 40 to 50 per cent of her body, reported Taiwan's China Times. The Singapore Trade Office in Taiwan is said to have contacted Ms Loy's family.

Among those injured were five other foreigners, as well as seven visitors from the mainland, Hong Kong and Macau, reported China Times.

They were among about 1,000 revellers dancing before a stage on Saturday in the Formosa Fun Coast park in New Taipei City, just outside Taipei, when they were sprayed with the apparently flammable powder, which had been used previously at the annual Color Play Asia festival.

The blaze, which broke out around 8.30pm, is suspected to have been caused by the explosion of the coloured powder, local government official Lin Chieh-yu told Reuters. "It remains under investigation as to what made the powder explode," he added.

Lee Lih-jong, deputy chief of the Health Bureau of New Taipei City, said 190 of the injured people were seriously hurt and were treated at 37 hospitals. No deaths have been reported.

Mr Lee told Agence France-Presse that many had sustained burns to the respiratory organs after inhaling the powder.

Rescuers who rushed to the scene treated hundreds of people, most of them aged between 20 and 30, who wore wet swimsuits and lay on inflatable rings.

"There was blood everywhere, including in the pool where lots of the injured were soaking themselves for relief from the pain," one male student told reporters.

His visibly shaken girlfriend added: "I saw lots of people whose skin was gone."

"Her whole life is ruined," sobbed the father of Chu Li, an 18-year-old girl with burns on 80 per cent of her body, at a hospital when President Ma Ying-jeou came to visit the victims.

The water park issued a statement yesterday saying it was "deeply saddened" and would co-operate in the investigation.

Five organisers of the festival, including event manager Lu Chung-chi, were detained by police and could be charged for violation of public safety and negligence of duties resulting in severe injuries.