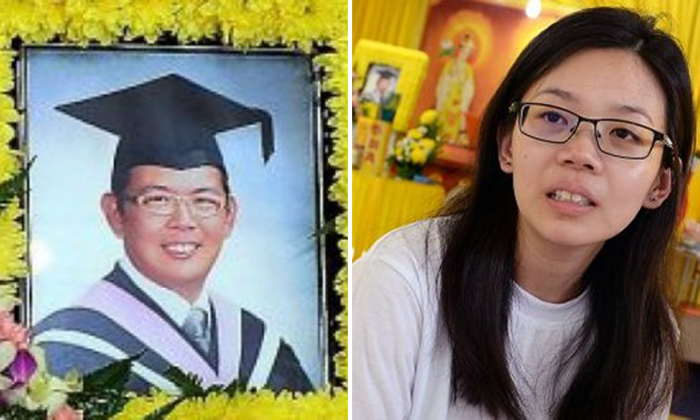 For six long hours, as she accompanied her brother's body on the drive back to Singapore, she kept her eyes peeled for bridges.

And at every bridge on the 540km journey from Perak, Miss Koh Yu Xiang, 27, said: "Kor, we're crossing a bridge now to take you home."

The ritual was part of a religious tradition that the family believed would ensure Mr Koh Kah Wei's "soul followed his body home".

It had been an emotional roller coaster for the sister of the 30-year-old lifesaver and kayak instructor who drowned in Sungei Tesong, about 90km south of Ipoh after an accident on Saturday. (See report )

On Sunday afternoon, her hopes were raised when she was told that Mr Koh had been found and taken to hospital.

But it was dashed soon after she got there, when she realised the caller had meant that her brother's body had been taken to the mortuary.

Around 5pm on Saturday, Miss Koh first got a call from her brother's friend who told her that her brother had gone missing after an accident at Sungai Tesong.

On Sunday morning, she set off for Perak with Mr Koh's girlfriend of three years and three other relatives.

They flew to Ipoh and then drove for an hour to the accident site.

Miss Koh told The New Paper: "We were taken to assess the river at the first point at a bridge. The weather wasn't very good, it was drizzling, and the river looked dangerous."

Even then, she did not lose hope as her brother often went on kayaking expeditions overseas and had the highest kayaking qualifications.

"I was worried but I was still hoping he would turn up because I trusted his survival techniques. He's always cautious and he's experienced in this area," she said.

Her hope was renewed when the group was called back to the base camp and heard that Mr Koh had been found and was on the way to the Tapah Hospital.

"I still had hope, perhaps slimmer but it was still there," she said.

When she reached the hospital, hope was replaced with despair when she discovered that Mr Koh's body had been taken there for a post-mortem.

"It's strange because that was his second time taking that same trail. He went once in the morning and everything was fine. The weather must have been very bad," said Miss Koh.

They had to wait for a few hours before they could identify Mr Koh's body.

Miss Koh said: "I'm glad that at least we found his body and it was intact, apart from a scar across his face that was probably caused by tree branches.

"It was his decision to go on the trip and I'm not blaming anyone for the accident."

She then accompanied the body home and performed the bridge ritual on behalf of her family.

Mr Koh's mother, Madam Mai Siew Hwee, 60, said she last saw her son on Friday around 7am before he left for his trip and she told him to take care of himself.

She told TNP in Mandarin: "I cannot say I regret letting him go because he went on kayaking trips a lot. Of course I'm heartbroken now.

"When he's overseas, I'd always think about where he was and what he was doing.

"He went on these trips too many times for me to remember. Before he left to catch his last flight, I told him to take care as it's dangerous.

"When we found out about his accident, I couldn't sleep because I was too worried. I would wake up every two hours."

Madam Mai said that once in a while, she would joke with her son and ask him when he would marry his girlfriend.

"He'd say he wanted to save money before getting married but I'd tell him that he could live with us, so there's no need to worry about the cost of buying a house," she said

"I told him I could cook for the family, too.

"His favourite dish was curry. Sometimes I'd specially prepare it for him when he came home for dinner.

About the accident
Kayaking instructor Koh Kah Wei died after his kayak capsized in a river in Perak, Malaysia, on Saturday.

The 30-year-old had left for the kayaking trip with six of his friends on Friday morning.

They were doing a second round of kayaking along a stretch of white water in Sungai Tesong when the accident happened.

"His kayak hit driftwood and overturned, throwing him into the water. His friends tried to help but failed as the current was swift," Bidor Fire and Rescue Department chief Nadzir Razak told Bernama.

A 30-man search-and-rescue operation was conducted on the same day but was hampered by bad weather.

The next day, 67 men went out looking for Mr Koh. At 3.15pm on Sunday, they found his body near a rock about 1km from the site of the accident.

His shirt was caught between rocks.

He'd been lifesaving since 14
He loved outdoor sports such as swimming, cycling and kayaking, and worked for Angel Lifesaver School which teaches lifesaving skills.

The 30-year-old was also a lecturer at the National Community Leadership Institute, the community leadership development arm of the People's Association (PA).

He also volunteered to do lifesaving duty at Kusu Island and East Coast Park, and canoe patrols in the coast off Changi Point Coastal Walk.

Mr Koh was also a volunteer trainer at PA-Water Venture, which offers water and adventure sports activities, since 201.

Mr George Lee (above), 60, a lifesaving examiner from SLSS, had known Mr Koh for about 10 years and was surprised to hear about the accident.

"He's a very humble and very good instructor. He learnt lifesaving when he was around 14 years old. He must had been knocked unconscious or else he wouldn't have died," he said.

"He was a good person. Since he was qualified, he would volunteer to be an open water lifesaver for free for at least one weekend every month."

Miss Koh Yu Xiang, 27, said that her brother also inspired her to become a volunteer with the kidsREAD programme at the Chinese Development Assistance Council (CDAC).

"I was in Secondary 4 when he took me to a meeting at the CDAC headquarters. He helped me apply to officially become a volunteer there when I was about 20," she said.