S'pore girl, 7, hit by rare neurological disorder that stops her from walking 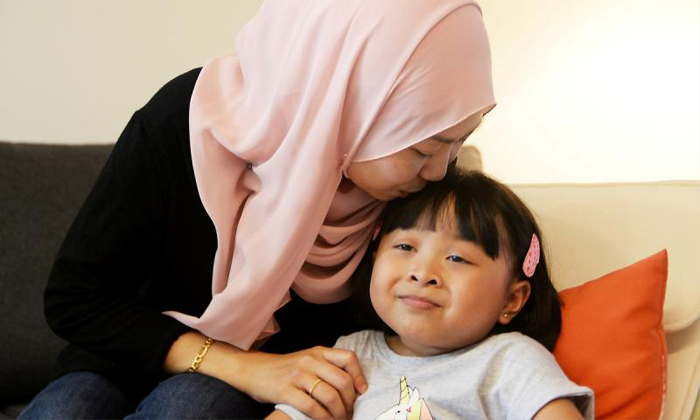 She and her mother used to go on long walks at Bedok Reservoir.

Now, seven-year-old Qatrina Yusri needs a walker and sometimes a wheelchair to move about.

She was diagnosed with a rare disease called Hereditary Spastic Paraplegia (HSP) in April. It is an inherited neurological condition that causes the patient's legs to become stiff and weak. (See report.)

In Qatrina's case, the disease has also made her incapable of controlling her bladder.

Her story first came to light when a video of her struggles with HSP was shared on Facebook by media company Screenbox earlier this month.

Madam Herlina Salamat, 37, first noticed her daughter walking more slowly than her peers in her primary school at the start of the year.

Qatrina, the third of four children, would also walk with her feet turned in - known as intoeing.

"We were once told by a doctor that intoeing is a common condition and it would disappear when she grows up," Madam Herlina, a personal assistant, told The New Paper at the family's flat in Tampines.

The diagnosis of HSP came about almost by chance. After a routine height and weight check-up in school in February, the 100cm-tall Qatrina was referred to the Health Promotion Board (HPB) to have her height re-measured and to see a doctor.

But the family postponed the appointment. By April, she was walking less and less because her leg muscles had become stiff. Her family had to push her around in a stroller.

When the family went to HPB in April, Qatrina was referred to National University Hospital (NUH) for an MRI scan.

Madam Herlina said: "It was only after the scan that the doctors at NUH diagnosed her with HSP.

"We were shocked when we got the diagnosis. My heart just dropped.

"I wanted to cry, but because Qatrina was in the room, I had to be strong, so I held it in."

Their hopes for a treatment were dashed when they learned that there is no cure for HSP.

"We felt so helpless. It's not like cancer, where you know what steps can be taken," said Madam Herlina.

But it did not stop her from trying.

"We tried a lot of different things to help her, from buying walking aids to sending her for traditional massages," she said.

"We would try almost anything to get help for her."

Madam Herlina then reached out to the brothers on their Mountain Tortoise Facebook page. (See report at right.)

"The brothers responded immediately and, a few days later, they came to our home to meet Qatrina," she said.

Said Mr Tan: "Aside from my younger brother, Qatrina is the only other person in Singapore with HSP that we know of."

He felt it was his duty to share with Qatrina and her family how he and his brother fight back against the disease by walking long distances.

"We just wanted to show Qatrina that although there is currently no cure, it doesn't mean she should give up and not exercise," he said.

For Madam Herlina, meeting the brothers was a godsend.

"Although walking is not a cure, it will keep her active and help to strengthen her legs," she said.

"I am really thankful that I was able to meet the brothers. They've really been so helpful to my family."

As for Qatrina, who sat quietly beside her mother throughout the interview playing with a mobile phone, the journey is just beginning.

When asked what she wants be when she grows up, she replied: "I want to be a policewoman."

"Hopefully," her mother said in support.

"I just want her to be happy and continue to fight on."

'Qatrina keeps us in check'

When they received a Facebook message from Madam Herlina Salamat about her seven-year-old daughter Qatrina Yusri, they replied immediately.

Mr Kenneth Tan, 28, and his brother Eugene, 26, were diagnosed with Hereditary Spastic Paraplegia (HSP) - an extremely rare neurological condition characterised by progressive stiffness and weakness of legs - in 2014.

"We felt that we needed to provide support to Qatrina and her family immediately," Mr Kenneth Tan, a social media consultant, told The New Paper over the phone.

"Her parents were understandably very worried for her because information about the disease is not widespread."

Within days of that initial contact last month, the brothers met Qatrina and her family to share their experience of living with HSP.

"We were able to share with them what has worked for us so far and what has not," said Mr Kenneth Tan.

"Perhaps the most important thing was that they need to get her to constantly train by walking."

Walking long distances has helped the brothers regain some semblance of their lives before they were diagnosed with HSP.

Mr Kenneth Tan had signed on as a diving officer in the Navy while Mr Eugene Tan was a commando when he was doing his national service.

Before the diagnosis, both had led fairly active lives, running marathons and climbing mountains.

Around 2012, they noticed that they were no longer able to run as well as they could.

"I used to able to run 2.4km under 9mins, but suddenly, no matter how hard I tried, my running times just got worse," said Mr Kenneth Tan.

In late 2013, he sought medical help when he could not meet the passing time of 12min 40secs for his annual Individual Physical Performance Test's 2.4km run.

"While the medical officer suspected that it could be HSP, I was officially diagnosed only in 2014, after a CT and MRI scan," he said.

Mr Eugene Tan, who had trouble running, got himself checked and was diagnosed a few months later.

In an interview with AsiaOne in October, Mr Kenneth Tan admitted that he slipped into depression after he was diagnosed in 2014.

He told AsiaOne that "I put on quite a bit of weight" but his former Navy buddies helped him get out of it.

Mr Kenneth Tan and Mr Eugene Tan, who is now a sports therapist, have designed a training programme to help them keep active and slow down the effects of the disease.

They go on long treks around Singapore, traversing the Green Corridor and climbing Bukit Timah Hill.

The Mountain Tortoise Facebook page was set up in September to document their training progress and to raise awareness about HSP.

Mr Kenneth Tan recently wrote on the page how his legs were responding better when he was hiking around Taiwan and South Korea while on a work trip.

With encouragement from the brothers, Qatrina exercises regularly to strengthen her legs.

The brothers and the family now share their exercise regimes as a way to motivate each other.

Mr Kenneth Tan said: "It also keeps us in check. If a child can fight on, we better not slack."

What is Hereditary Spastic Paraplegia?

Hereditary Spastic Paraplegia (HSP) is a group of inherited neurological conditions that leads to the progressive stiffness and weakness of the legs.

Associate Professor Prakash Kumar said a person with HSP will have difficulty walking. The senior consultant at the Department of Neurology at National Neuroscience Institute said HSP symptoms can start appearing at any stage of life.

The disease is passed down in the family though an abnormal gene.

"The abnormal gene is either inherited or the result of mutation in the affected individual," he said.

The symptoms progress from a mild leg stiffness and walking difficulties, to the person eventually requiring a cane, walker or wheelchair to move.

Prof Prakash also said that in more complex cases, there can be additional symptoms such as impaired vision, hearing, cognition and bladder disturbances.

According to the US National Organisation for Rare Disorders, patients with HSP cannot move properly because the brain can no longer communicate effectively with the legs, causing the leg muscles to stiffen up and weaken.

It is so rare that it is not known how many people in Singapore suffer from HSP, said Prof Prakash.

"The degree of disability varies among patients. Most of those with uncomplicated HSP have a normal life expectancy."

Although there is no treatment to prevent, slow or cure HSP, muscle relaxants and physical therapy can help reduce muscle stiffness.