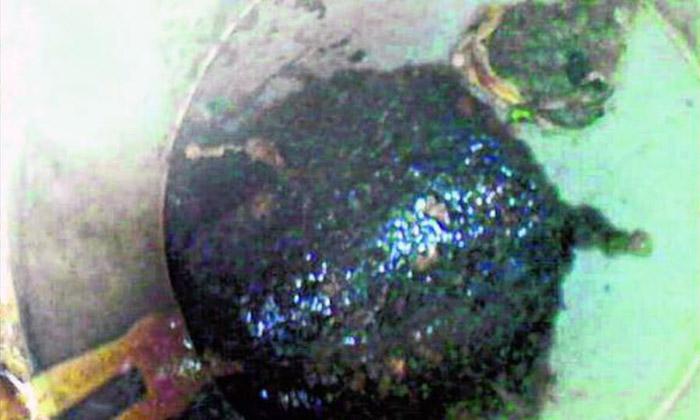 Puzzled over a blockage in her toilet's plumbing, a flat owner hired a plumber who found a dead tortoise in the drainpipe.

The owner, a 43-year-old human resources manager who gave her name as Madam Luo, told Lianhe Wanbao in a report yesterday that she had moved in a month ago.

Two weeks ago, when getting a new toilet bowl installed, she found that the drainage hole seemed blocked.

It made a gurgling sound when water flowed in and the water flow seemed especially slow.

She got a plumber to clear the pipe, but it got blocked again a week later, and the problem seemed to worsen.

Madam Luo said the water would not flow into the pipe and instead overflowed back onto the floor.

Pouring chemicals in did not help, either. On Saturday, she called a plumber again.

He went to the unit downstairs and opened the pipe cover to take a closer look.

"He opened the cover, put his mobile phone in to film what it looked like, and the video gave me a shock," said Madam Luo.

"A black mass was stuck in the pipe. At first glance, it looked like a tortoise."

The plumber had cleared many blocked pipes, most of which were clogged by brushes, soap or small items of clothing.

But he had never considered that a tortoise would be blocking a pipe.

After trying all he could to no avail, he called wildlife rescue group Acres (Animal Concerns Research and Education Society).

The Acres officer confirmed upon arrival that a tortoise was stuck in the pipe, and that it had died for some time.

Acres told Wanbao that most tortoises in Singapore are red-eared sliders, and that releasing one in the wild is illegal, so many owners flush them down the toilet or drainage pipes.

The spokesman added that the species of the tortoise in the pipe could not be determined as it was badly decomposed.

He also said that the tortoise could have been allowed to roam freely at home and accidentally fell into the drain.

Acres appealed to all those with pet tortoises or terrapins to be mindful of the environment when letting their pets out to roam, and to cover any holes in the floor.

The drainage pipe is only about 100mm wide, and the tortoise's shell is more than 90mm wide.

The shell is too hard for it to be flushed out using conventional methods.

The plumber intends to smash it into pieces which can flush down the drainage system.

Related Stories
Man gets stuck in toilet bowl after climbing in to retrieve lost phone
Fujian man tries to fix washing machine -- and gets his head stuck inside
Girl trapped for 40 mins after leg gets stuck in concrete slab along Joo Chiat Road
More About:
animals
stuck
stuck in pipe