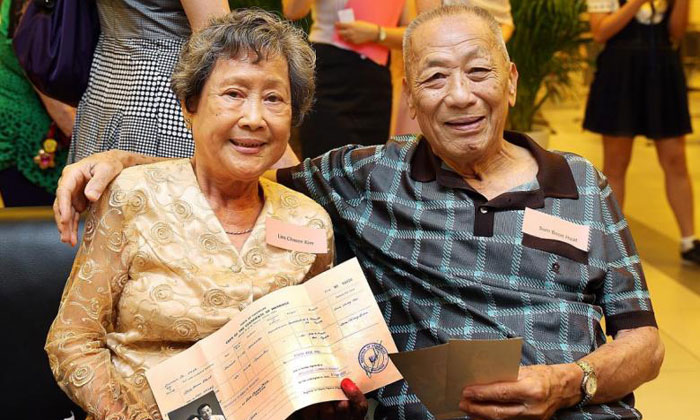 Last year, there were 7,522 divorces and annulments, the third-highest annual figure on record, according to a report by the Department of Statistics released in July.

But there is good news. Last week, six elderly couples, who have spent over 50 years together, renewed their vows at the Registry of Marriages (ROM).

Three of them and their solemnisers shared their love story with The New Paper.

To this day, Mr Sun continues to buy daily necessities for his wife.

It has been a responsibility that Mr Sun has taken on since day one.

Said Madam Lim: "My husband will always buy the items, while I focused on taking care of our four children."

There is no real secret to maintaining a long marriage, she said.

The only way is to tolerate each other.

And it was not always a bed of roses.

They used to argue over Mr Sun coming home late, said the grandmother of six..

Madam Lim added: "There shouldn't be any overnight hatred between a couple.

"It's important that we look past each other's flaws as well."

Her sweetest memory, said Madam Lim who got married in 1961, was their honeymoon in Taiwan in the 1980s.

They had put off their honeymoon as they wanted to save money for their children's education.

Mr Tan recalled how he courted Madam Lee, whom he met through a mutual friend.

He casually asked her what was a nice movie to watch, thenasked if she would like to watch it with him.

Said Mr Tan: "When she said yes, it meant I had won half the battle."

While he does not remember any significant fights, he said they had cold wars from time to time.

But the most important thing, he stressed, is to remember each other's good points and take care of each other in times of need.

"Recreational activities such as watching movies also help strengthen the marriage and bond the family," he added.

The sweetest moment for Mr Chiang and his wife was when their first son was born.

He said in Mandarin: "Our factory had finally produced."

The former factory worker who now has two sons said their biggest fight happened during one Chinese New Year.

"I gambled with my colleagues in the factory and when I lost, I was so angry that I tore the movie tickets which I bought for my wife and me," said Mr Chiang.

Madam Tan forgave him and told him not to gamble again.

His secret to a lasting marriage is acceptance and tolerance.

When he is unhappy, he will sing alone in his room to calm himself down.

Mr Chiang added: "Also, when either one of us does something wrong, we will apologise to each other."

It was an extra-curricular activity in school that brought the couple together.

Mr Tan told TNP that even though he and his wife attended different schools, they were members of their schools' Drama Club.

"We got to help out in each other's school drama performances and backstage work, and from there our friendship developed," he said.

To keep a marriage going, be honest, respectful, understanding and inclusive of each other, he said.

"There should be mutual care, love and respect towards each other's family in all circumstances," said the solemniser, who has two children.

"As husband and wife living together for years, differences and arguments are unavoidable. We need to calm down and solve the issues gradually."