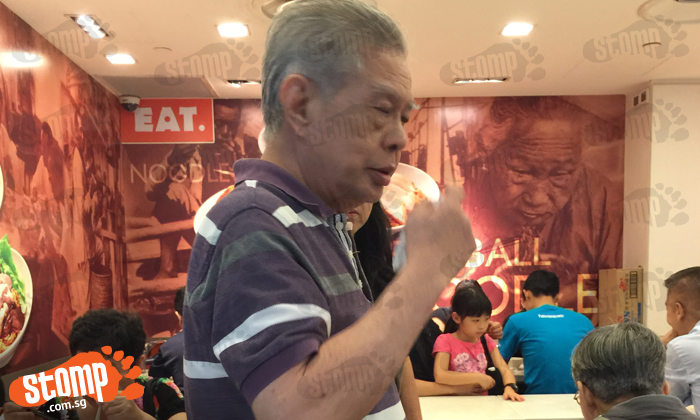 Stomper HY is horrified after an unpleasant encounter with a man who had allegedly spilled freshly-made hot coffee on her and claimed that it was no big deal yesterday (Dec 21) evening, 5.29pm at EAT. eatery located in NEX shopping mall.

Said the hurt and enraged Stomper:

"I was with my two daughters, and had just finished eating my noodles and was looking through the messages on my mobile phone.

"Suddenly, a man in his 60s lost balance of his tray and spilt an entire cup of freshly-made hot milk coffee in a glass cup on my right leg!"

"To make matters worst, the uncle just simply said in Chinese, 'Sorry lah, it's just a small matter. No big deal!', before quickly walking away, towards the direction of his wife who was seated down a few tables away."

"His wife then yelled at me and accused me of lifting my hands and knocking into her husband. That is untrue, as when that incident happened, I was seated down and was holding my phone with both hands," said HY.

According to HY, the couple did not even bother to check my condition or ask if she was alright.

Instead, they continued to eat their noodles, as if nothing had happened.

"I told the couple that I was going to the nearby clinic to see a doctor for my scalding and requested that they pay for my medical bills.

"Upon hearing that, the auntie shouted sarcastically in Chinese that I should come to the eatery every day and sit at the same seat to purposely make people pour coffee on me so that I can earn money by asking people for medical compensations.

"Then, I called the police. Upon hearing that the police was on their way, the couple then hurriedly wanted to make an exit, claiming that they had to rush off to work.

"The irony was that both of them wore very casual clothes and shoes. Were they really rushing off to work or just trying to leave so as not to be held accountable for his actions?"

HY then went on to mention that the man shouted at her before leaving, asking her to wait at the eatery for him and his wife to return to get the police to arrest her for causing trouble at the eatery and disturbing people from doing business.

The police arrived shortly, but no assistance was required, as the Stomper hobbled her way with her two daughters to the clinic for treatment.

"There were four workers at the eatery, but all of them simply stood behind the counter and did not offer to help, except for a cook who gave me tissue paper to wipe away my tears and comforted me as I was badly shaken from the horrible incident," added HY.

The mall management has offered to work with the eatery and the police to assist the investigations.

Related Stories
Foul-mouthed spoilt teen screams at grandpa for being late for appointment at Apple Store
"Why do you care? It's not your problem": Bus driver uses Bigo app while driving and allegedly tells concerned user to mind his own business
What happened? Man yells at passer-by for reportedly defending busker’s choice to play music loudly at Tampines MRT station
shopping mall
scary
rude
irresponsible
bad service