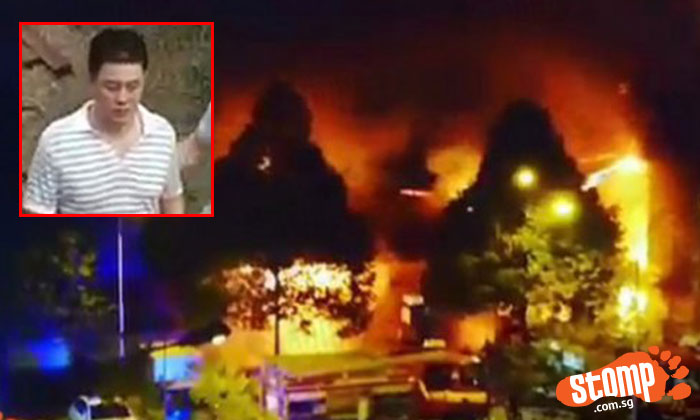 The arson suspect arrested on Thursday over the Jurong West market fire is known to many of the affected stallholders and residents in the area.

They were surprised to see the man, whom some described as being slow-witted, when police officers took him back to the scene for investigations yesterday afternoon.

A huge blaze destroyed a wet market and coffee shop at Block 493, Jurong West Street 41, in the early hours of Tuesday.

A coffee shop at adjoining Block 494 was also badly damaged.

A resident at nearby Block 499, Mr Jason Teh, 68, shot a video from his 17th-storey unit of the police with the suspect near the market at around 5pm yesterday.

He and other residents had told The New Paper on Tuesday that they had heard loud quarrelling coming from the market at about 2.30am, minutes before the fire broke out.

It is not known if that had anything to do with the fire.

Mr Teh said yesterday: "I don't understand why he set fire to the market. Even if it was a quarrel, why do it? I feel sad for the stallholders making an honest living."

The police said yesterday that a 41-year-old man was arrested at Jurong West Street 41 on Thursday for his suspected involvement in a case of mischief by fire at Block 493.

The Commander of Jurong Division, Assistant Commissioner of Police Koh Wei Keong, said: "This is a serious crime which had resulted in extensive damage to property and loss of income to innocent victims.

"The police have zero tolerance for such lawless acts and will ensure that perpetrators are dealt with to the fullest extent of the law." Stallholders contacted by TNP welcomed the arrest, but some were more concerned about when and where they could resume their trade.

Mr Neo Chwee Eng, 81, who had been selling uncooked yong tau foo at the wet market for nearly 20 years, said: "It's very good that a suspect has been arrested.

"I'm angry because his actions caused so many people to suffer. If he did it, he must be punished."

Mr Neo has to support his wheelchair-bound wife, 78, his diabetic son who had a leg amputated recently, and the son's family.

Madam Haw Mui Eng, 47, who sold fishball noodles at the Block 493 coffee shop for 10 years, said she recognised the suspect.

She said: "He always loitered around here. Everyone has seen him before. He went around telling people he started the fire on Tuesday."

Describing the man as plump with big eyes, Madam Haw said he is also slow-witted and behaves strangely.

"I'm not angry at him. Right now, I just want the police to finish their investigations as soon as possible, so the market can be rebuilt quickly," she said.

Madam Noorlin Rahman, 52, who owns Noorlin Seafood at Block 494, said that if the suspect had started the fire, "what he did was stupid, and I don't know what made him do it".

She added: "I'm definitely angry, but I feel sadder thinking about what made him decide to set fire to the place.

"Why would he do this to everyone? Some people run businesses just to survive, not because they love to, and now they have nothing."

Madam Loh Ngok, 61, who sold chilli at the wet market, said: "I'm sad and furious at the same time because for so many years, I've been selling chilli to people who live here or run food stalls near the market. The fire has impacted us and our businesses."

Jurong GRC MP Ang Wei Neng told TNP yesterday: "I am very saddened by the act of arson, but I want to concentrate the resources to rebuild the market as soon as possible.

"What he has done has broken the rice bowl of over 50 stallholders."

The suspect is expected to be charged in court today with mischief by fire with intent to destroy a building. If convicted, he can be jailed for life, or for up to 10 years and fined.

The meeting on Thursday evening to offer solutions to the stallholders affected by the fire was a tense affair.

At the meeting, which was attended by Jurong GRC MP Ang Wei Neng, representatives from HDB, National Environment Agency (NEA), Ministry of Social and Family Development (MSF) and Singapore Civil Defence Force (SCDF), and operators of the market and two coffee shops, the stallholders were given a list of alternative locations to resume their business.

But 10 stallholders who spoke to The New Paper after the meeting were unhappy, mainly because they did not want to move from where they had plied their trade for years.

Mr Neo Chwee Eng, 81, who has sold uncooked yong tau foo in the market for 20 years, did not even bother to look at the list.

He said: "At my age, travelling is too tiring. Previously, it would take me only a few minutes to walk to the market."

After reading TNP's report on Thursday about Mr Neo having to support his wheelchair-bound wife and son, 20 readers came forward to offer help.

Mr Neo initially declined to accept the donations, but changed his mind after the meeting.

He said: "I still feel embarrassed to accept the donations, but I'd like to say 'thank you' to those who came forward."

Mr Ang said the stallholders would have to decide whether to take up a temporary stall location by Monday.

Stallholders who are interested will get assistance to relocate to the new stalls, where monthly rental costs are between $200 and $850.

"Business is expected to resume within a month," said HDB.

Mr Ang said the feasibility of building a temporary wet market and food centre at a new basketball court in front of Block 498 was being studied by HDB and NEA.

But both said it might be better to channel resources to rebuild the market, which will take about a year.

They will work with the owners of the two coffee shops, which are sold premises, in helping the stallholders.

HDB will waive the rental for the operator for the market.

The Jurong-Clementi Town Council will also waive the service and conservancy charges, on condition that the savings will be passed on to the affected stallholders.

MSF's Social Service Office in Taman Jurong will provide assistance to stallholders, with immediate relief funds to be disbursed by Southwest CDC.

Mr Ang said: "We have decided to provide an emergency relief fund of $500 to each of the stallholders tonight."

But many stallholders were also unhappy with the amount.