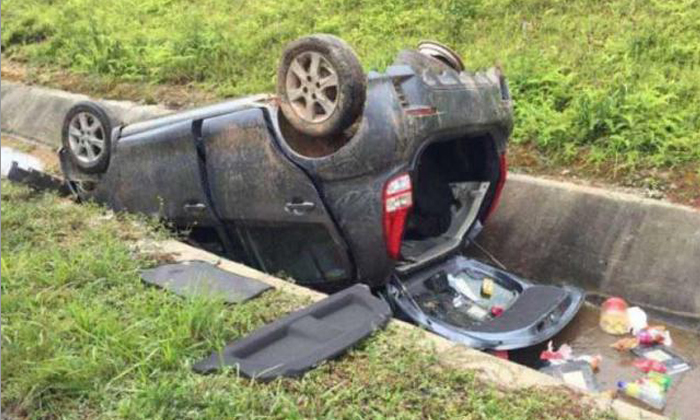 Five vehicles including a lorry trailer were involved in a series of accidents at KM44.4 of the North-South Highway near the town of Sedenak on Sunday (July 31).

The incident, which happened at around 1.30pm during heavy rain and slippery conditions, caused a massive south-bound traffic jam that stretched for 10km.

Kulai OCPD (Officer Commanding Police District) Superintendent Razak Md Said said that the incident started when the driver of a Perodua Myvi lost control while avoiding a water puddle, causing it to hit the slopes and turned turtle in a drain.

"A Toyota sedan decided to stop in the emergency lane to assist the victims in the Myvi, carrying a Singaporean family of three, who were returning from a holiday in Malacca," Supt Razak said in a statement.

"This caused a trailer following it to swerve to the right lane and hit the middle divider, and badly damaging the lorry's front."

He added that a Toyota Estima travelling in the same direction slowed down to avoid colliding with the lorry but was unfortunately hit in the back by a Proton Wira.

"Following the incidents, the Perodua Myvi driver suffered head injuries while his mother suffered injuries to both her legs. The trailer driver and other passengers escaped injury," he said.

Supt Razak said that the case is being investigated for negligent driving.