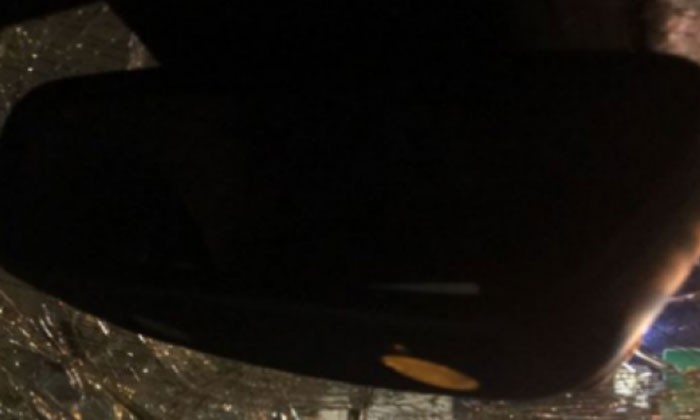 The gang of bikers did not care that there were an elderly woman and a child in the car.

They were out to terrorise the driver and his three passengers in the Singapore-registered Mercedes Benz into handing over their money and valuables.

The Singaporean family had to endure a 45-minute ordeal after they were waylaid on the congested Malaysian North-South Highway following what seemed like a staged accident when a motorcyclist hit their car.

The driver, who wanted to be known only as Mr Jay, 31, told The New Paper on Tuesday that the bikers repeatedly hit his car with their helmets and other objects, damaging the headlights and side mirrors.

They even hit the front windscreen.

The incident took place between Yong Peng and Machap in Johor, about 45 minute's drive from Singapore, around 10pm on Oct 30.

Last Friday, TNP reported that Singaporean businessman Herman Zaidin, 31, suffered a similar ordeal when he was robbed by a gang of bikers at 11.30pm on Oct 30 after a motorcyclist hit his Mercedes-Benz from behind.

While it is not known if the same gang was behind both heists, it's highly probable given the same method used in both incidents, which occurred about 90 minutes and 38km apart.

Mr Jay, an engineer, said he has reported the robbery to the Malaysian and Singapore police, with both confirming the reports.

He said his 20-year-old sister was sitting in the front passenger seat. Their aunt, who is in her 60s, was in the back with her 12-year-old adopted son.

They were returning to Singapore after a family trip to Malacca when a motorcyclist suddenly rode next to their car and kicked the side mirror on the driver's side.

Mr Jay said he stopped the car when the rider fell.

"Suddenly, another rider came by and hit my car several times with his hands and helmet, asking me to step out. He tried to open my door but it was locked."

Seconds later, about five motorcyclists stopped in front of his car. They ordered him to come out, but he stayed put out of fear.

Despite the heavy traffic, Mr Jay managed to drive forward in a bid to get away.

But the robbers, numbering about 10 by then, chased after him.

He saw that one of them was carrying a 1.5m wooden pole which he used to whack the already cracked windscreen, causing more damage.

Mr Jay said: "Just one more hit and the windscreen would have given way. I knew I had to step out to save my family."

He told his sister to lock the doors immediately after he got out. The men took turns to beat him.

His sister, a student who wanted to be known only as Miss Annie, said she was so terrified that she broke down.

She told TNP: "My young cousin was also in tears. I called the Malaysian police.

"I also begged my brother not to get out but he insisted. He could have been killed.

"I felt so helpless when they beat him up, but I knew I shouldn't get out of the car for my own safety."

Mr Jay said the man who was carrying the pole was about to beat him with it when five motorists, who were passing by, stepped in to stop the attack.

"One of the attackers asked me to hand over my passport and RM2,000 (S$660) as compensation for causing the 'accident' with their friend," he said.

"I gave them $650 and hoped they would leave us alone but they wanted my mobile phone as well. I refused to give it to them.

"Suddenly, they fled. I think they had other friends in the area who told them that the police were coming."

The police arrived less than a minute later, and Mr Jay and his family went to Kulai Police Station to make a report. He then went to a nearby hospital for a check-up.

"I'm lucky I didn't suffer any serious injuries. Just some pain and a few bruises here and there," he said.

Because his car was damaged, he had to drive slowly to Woodlands Checkpoint and they cleared immigration only at around 6am the next day.

He reported the incident to the Woodlands West Neighbourhood Police Centre and had his car towed away to be repaired.Mr Jay estimated the cost of fixing his car to be about $30,000.

"I used to drive to Malaysia twice a month for leisure and to visit family. I think I'll fly there from now," he said.

"The attack was the most terrifying experience of my life."

He was driving alone back to Singapore on the North-South Highway near Simpang Renggam in Johor on Oct 30 when he was assaulted and robbed by a group of more than 10 men.

Singaporean businessman Herman Zaidin, 31, told The New Paper that one of the men claimed to have been injured after his motorcycle hit Mr Herman's Mercedes-Benz on the heavily congested highway.

A group of men then appeared and demanded compensation for the biker.

One of them used a spanner to smash the windscreen of Mr Herman's car and another opened the door.

The men rained blows on him.

The spanner-wielding man hit Mr Herman on his left eye.

The men ordered him to get out of his car, but he refused out of fear that they would take his car.

Realising that he would not budge, they ordered him to hand over his wallet containing about S$300 and RM400 (S$130).

After he gave in to their demands, they helped themselves to his in-vehicle camera, his mobile phone and its power bank.

They also ordered him to open the boot from the driver's seat and they took his notebook before fleeing on their motorbikes.

Mr Herman said he lost about $2,400 in cash and valuables.

Singapore police and an officer from Simpang Renggam Police Station said Mr Herman had made police reports about the incident.

Experts: Give robbers what they want

If you are being robbed, don't risk your life - just give the robbers what they want.

This is one of the tips for robbery victims by the Selangor chapter of Malaysia Crime Prevention Foundation (MCPF).

Former Singaporean policeman Joseph Tan, who served in the force from 1985 to 1992, agreed.

He said: "The cases involving the victims on the Malaysian North-South Highway were quite complicated because the road was congested, making it tough for the drivers to flee.

"I think it is best not to aggravate the robbers and give them what they want as soon as possible."

The founder of the Crime Library, a voluntary group that helps track missing people, said that instead of trying to flee or disobeying the robbers, victims could wind down a window just a crack to find out what they want and try to negotiate.

He said: "Just give them what they want, your life is more precious than your valuables and money.

"This could prevent anyone from getting hurt and minimise the damage to their cars."

Mr Tan said victims should make a police report as soon as possible.

The MCPF offered similar advice: "If you are robbed or assaulted, report the crime to the police.

"Try to describe the attacker accurately. You can help prevent someone else from becoming a victim."