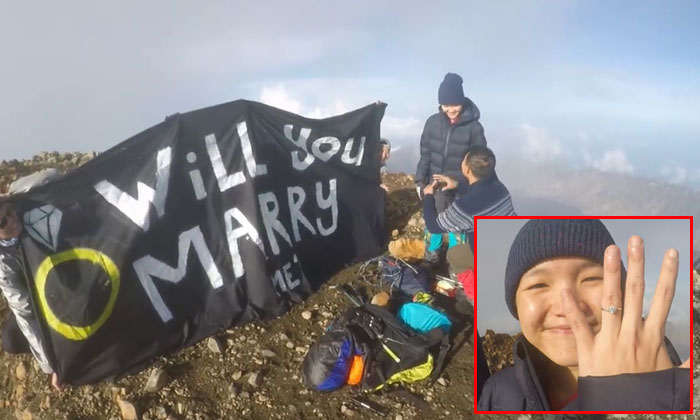 In October, AsiaOne spoke to brothers Kenneth and Eugene Tan about living with Hereditary Spastic Paraplegia, a rare genetic neurological condition. About three in 100,000 people in the US suffer from this disease. There are no current statistics for the Singapore population at the moment.

Singaporean Eugene Tan scaled Mount Rinjani as a bachelor and came down an engaged man.

Looming high above the island of Lombok at 3,726m is Mount Rinjani, Indonesia's second highest mountain and one of the archipelago's most active volcanoes.

The three days and two nights trek would have been a manageable feat for just about anyone but not for this former Commando officer.

You see, Eugene was diagnosed with Hereditary Spastic Paraplegia in 2014, a neurological condition which impedes his mobility. Older brother Kenneth suffers from the same affliction.

Within months, the sports science and management graduate had to give up his ultra-marathon racing career. Even climbing the stairs became an agonising chore.

But he never once hung up his sports shoes. The 26-year-old has been doing rehabilitating exercises with his brother to strengthen their weakening muscles. He told AsiaOne in October that he had plans to climb Mount Rinjani, before his legs completely gave out.

The duo journals their trainings on their Facebook page, Mountain Tortoise.

Two months on, Eugene fulfilled his promise and became the first HSP-diagnosed person in Singapore to scale a mountain and made an attempt to do so early this month.

But climbing the volcano was secondary to his main mission. He had something else in mind.

"It has always been my aim to propose to my girlfriend on the summit of a challenging mountain and this truly was challenging," admitted Eugene.

He first met his girlfriend Ms Tan Ci Hui, 24, at the Nanyang Technological University where they were coursemates. The two have been dating for five years, and not once did the thrill-seeking couple let Eugene's condition get in the way of pursuing life's simple joys.

Since AsiaOne spoke to the Tan brothers in October, Eugene has picked up active isolated stretching which has alleviated the pains of his condition.

He has also recently embarked on a career as a sports therapist - a stepping stone to snapping his nuptial proposal plans in place.

To train for the trek, Eugene and some of his batchmates from Catholic Junior College's Outdoor Adventure Club, went on long hikes across MacRitchie Reservoir and Bukit Timah Hill. He also practised walking with hiking poles instead of relying on his walker during these sessions.

The group are avid mountaineers who have been scaling heights together since their college days.

But no amount of training was enough to prepare him for the expedition.

While majority of the trek was manageable, Eugene had to face a literal uphill battle with the volcano's notorious summit push.

He recounted: "My muscles were in pain but I just stepped once, took a breather and stepped again. The climb to the summit was definitely a slow and painful one."

Most volcanoes are typically characterised by scree - extremely loose gravel - towards the summit, which makes it incredibly difficult to overcome. And Mount Rinjani is famous for its killer scree.

Like many others, the summit push was the most painful part of the trek for Eugene. But while it's a common sight to see hikers giving up and turning around, he pressed on.

"It was quite far in so I never thought of giving up and turning back. That made it difficult as I could only go forward. The only thing on my mind was that every step brings me a little closer so I just moved step by step."

After all he was a man on a mission.

"The most important thing for the proposal was definitely reaching the summit. If I could impress her with my effort, I'm sure that it would be a successful proposal," he said.

For batch-mate and fellow hiker Mr Tan Jun Khiang, watching Eugene scale the mountain was a painful but moving moment.

"The Eugene we used to know ran like The Flash and walked with purpose. He can no longer do that. He now walks clumsily and the summit push siphoned every last bit of energy from him.

"He told us that climbing Mount Rinjani in his current condition was as tough as his North Face 100km challenge back when he was still healthy," Mr Tan told AsiaOne.

The rest of the group reached the summit in four hours while Eugene and another hiker arrived in five.

To ease his pain, the group had hired an additional porter to help Eugene with his backpack.

Mr Tan added: "He could have just given up even with us offloading him and the guides helping him, but he didn't. Only the power of love and clear mental purpose could have gotten him up there."

When Eugene's legs finally gave way at the summit on Dec 1, the group unfurled a large banner which he had painted days before.

He then got down on one knee and popped the question.