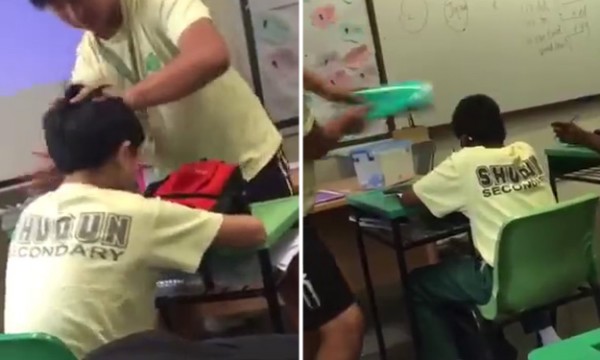 A video circulating on Facebook shows a secondary school student slapping his classmates on the head multiple times and hitting them with a book.

The video, posted on All Singapore Stuff, first shows a male student hitting a seated classmate on his head while fellow classmates laughed at him in the background.

Based on their attire, the students are believed to be from Shuqun Secondary School.

The slaps seemed to be in tune with the music that was playing in the background.

The student then proceeds to slap his classmate on his cheek.

Things did not stop there however.

Towards the end of the video, the student can be seen using a rolled-up book to hit the classmate he slapped earlier as well as another classmate on his head.

The video has garnered more than 50,000 views since it was posted this morning.

According to The Straits Times, the Ministry of Education and Shuqun Secondary School are investigating the matter.

It is believed that a case of bullying had likely occurred.

What are your thoughts about what happened? Let us know in the comments below.