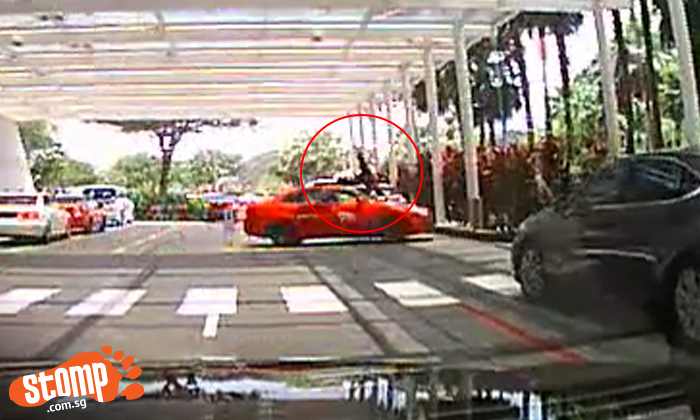 A video showing how a taxi rammed into a pedestrian before crashing into a pillar has been circulating online.

Stompers Dean, Bill, Mike and Marcus alerted Stomp to the incident and said it occurred at the driveway of Tower 1, Marina Bay Sands earlier today (Sep 24) at about 1.30pm.

A clip that they sent to Stomp via WhatsApp shows a man seemingly crossing the road halfway when the taxi suddenly appeared and ploughed into him.

Screeching noises from the vehicle's wheels can also be heard.

The taxi then hit a pillar before coming to a stop.

A second video contributed by Dean shows a crowd and security personnel rushing to check on the accident scene.

In response to media queries by Stomp, a spokesperson for the Police said that the accident involved a taxi, a car and a pedestrian.

He added: "The 52-year-old taxi driver and 70-year-old pedestrian were conveyed conscious to SGH. Police investigations are ongoing."

The SCDF dispatched two ambulances to the scene and said that SGH had been alerted to be on standby to receive the victims, one of whom is a male Chinese in his 70s.

Related Stories
Motorcyclist flung off bike after ramming into Volkswagen near West Coast Park
Watch out! Look how close woman came to being knocked down by pick-up truck at Siglap Road
Trying to show off? Watch Nissan GT-R speed through carpark and smash into oncoming car
More About:
accident
shocking
reckless
reckless driver
taxi