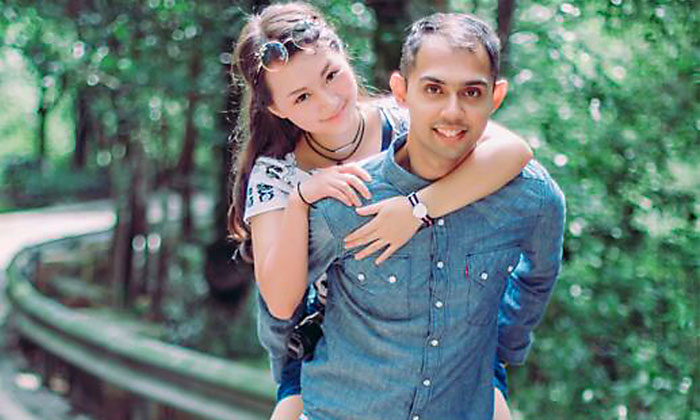 Mr Rajesh Singh is planning to formally propose to his wife.

And it is going to be the ride of his life as the "surprise proposal" will take place in a cable car cabin on New Year's Eve.

Listeners had to call in and explain why they felt they deserved to win.

But here is the twist: Mr Singh, a Singaporean, and his wife, Ms Mia Wang, 25, from mainland China, have been married for slightly over a year.

Their fathers had played matchmakers and proposed an arranged marriage.

They had business dealings with each other and have been friends for more than 10 years.

Mr Singh told The New Paper: "My father and hers did business in the perfume and textile industry in China."

He added that he had been "dating around" but did not find his Miss Right.

"I was also at the age to get married and my options were getting quite limited," said Mr Singh. "

So I was open to the idea of an arranged marriage."

Mr Singh's father had met Ms Wang when she was studying in Shanghai and "thought she was sweet and lovely".

Mr Singh met Ms Wang online in 2012 and started communicating with her via Skype and WeChat almost every day in English.

He finally travelled to Germany, where she was pursuing her masters degree, and met her in person for the first time in 2014.

Said Mr Singh: "We were nervous when we met for the first time.

"She could see me trembling.But there was this sense of familiarity between us."

Said Ms Wang: "I didn't mind the arranged marriage because my parents knew his parents. If they felt it was a good match, why not give it a try?"

Mr Singh was attracted to how caring and adoring Ms Wang was.

He said: "She's a very chirpy person, and dotes on me a lot. Sometimes when we cross a road, she would cover my nose so that I wouldn't smell the exhaust fumes.

"She made me want to care for her as well."

Ms Wang, who is working as a financial analyst, is here on a long-term visit pass.

Despite her young age, she did not mind being in an arranged marriage, said Mr Singh.

Some of her cousins also went through arranged marriages.

After Ms Wang completed her masters degree, she returned to China before coming to Singapore to visit Mr Singh and his parents last year.

Things happened quickly after that. Within two months, in April last year, they held a Punjabi wedding ceremony.

Said Ms Wang: "I was hesitant but I was more excited than nervous."

Two months later, they exchanged wedding vows at the Registry of Marriages.

Going through the customary Chinese wedding ceremony was important for Ms Wang.

That is expected to happen in April next year.

Now, Mr Singh wants to make it even more special and "do the right marriage proposal".

He said: "(It's not like) in the past where a proposal was simple and easy. Now we have to do something grand and wonderful. "

So, when I heard about the contest, I thought it was the perfect opportunity. "

Klass said: "We rarely hear people publicly say theirs is an arranged marriage.

"And he wanted to set things right with his wife who never got to be courted and romanced (in real life).

"I thought by bringing him on, those of us who may not be exposed to these other culturally accepted forms of unions can have a glimpse into others perspective of love and marriage."

Ms Wang said: "Rajesh has a very charming personality and he's really sweet to me.

"And he's really good looking too!"