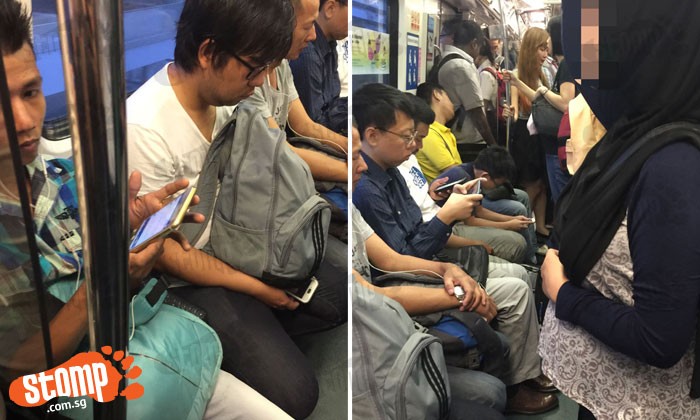 Stomper F boarded the train around 7am today at Choa Chu Kang when she noticed a pregnant woman standing and not being offered any seats.

“I just find it really very extremely ridiculous that none of the sitting passengers offered her a seat,” she said.

Rafikah wanted to ask the passengers who were seated to offer the pregnant woman a seat, but was not able to as they were all either "sleeping" or at a distance from her.

She said: "One of the ‘'exhausted’ sleeping passengers that sat in front of her freaking open up his eyes and was looking straight at her bulging tummy but he quickly shut his eyes so that he don't have to give up his sit to this pregnant lady."

"And it's surprising that the whole stretch of passengers that were sitting down were guys! Well i'm not saying that guys cannot be sick and need to sit, but seriously?"

According to F, the guy who was seated at the reserved seat was awake when he realised he reached Jurong East, it was also when she coincidentally snapped a picture of him.

She also mentioned that the pregnant woman was already on the train at the time of her boarding.

It’s certainly unfortunate that the others around her did not bother helping her find a seat as well.

"How heartless can you people be? I felt really sorry for her," said F.

Related Stories
The only thing I care about are my groceries
Like that also can? Check out how commuter sits on board bus
Ex-NBA player snaps photo of woman who refused to remove things to let him sit beside her on train
More About:
inconsiderate
inconsiderate commuters
MRT
train