Schooling targets a special time in 100 fly at world meet 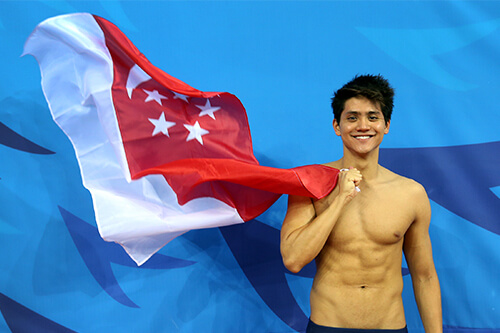 He knows it sits in a ornate wooden box secured by a green ribbon, but Joseph Schooling has no idea where his Olympic gold medal is.

For much of his life, the 21-year-old swimmer got up early in the morning to get wet in training, he worked tirelessly in the gym to hone muscle to realise his dream of winning at the Olympic Games.

And in Rio in August, it all came together in spectacular fashion when he stormed to victory in the men's 100m butterfly to collect that precious medal.

Imagine the surprise when he revealed the prized possession was not with him.

"I have no idea, it's probably somewhere in my dad's office," Schooling told The New Paper in an interview earlier this week.

"I left it here, I don't want to be looking at it in my apartment (in the US) all the time."

Schooling is studying and training at the University of Texas and returned home last week for yesterday's golf fundraiser organised by the Singapore Swimming Association.

While it will forever be cherished, the star swimmer does not keep the medal because he wants to look ahead and start afresh.

He has new goals, the first of which is to break Michael Phelps' 100m butterfly world record of 49.82sec.

"I want to break the world record in Budapest next year (July) at the Worlds... I don't have a specific time in mind; whether it's 48.9 or 49.81, I don't care," he said at a media conference at the Tanah Merah Country Club yesterday.

Schooling has been in contact with University of Texas swim coach Eddie Reese over the last few days - the swimmer arrived in Singapore last Friday and leaves this Friday - and he is ready for hard work when he returns to the United States.

"Eddie sent me a long text yesterday... and the last sentence was, 'I like you no matter what, except if you get fat'; that's Eddie's humour for you."

Training has been "on and off" for Schooling since the Olympics, and he acknowledged that at times he was tempted to take it easy, especially with all the adulation over his victory.

Schooling's Rio win made him the first Singaporean Olympic gold medallist and he said: "I definitely felt I had reached the pinnacle and achieved all my goals.

"But there is still a lot of work to be done and improvements to be made, and I'm really excited about that.

"I feel that I am still far from my full potential, and there's a lot of work to do."

He said there would not be much change to his weights or technique programmes, but Reese has introduced new elements to his dry-land training.

"It is so hard, but that's one of the key things that will bring me to the next level."

He sees South African Chad le Clos as his main rival at the 2020 Tokyo Olympics, after Phelps' retirement.

Schooling said: "The rivalry with him (le Clos) will grow in the next few years, and it will be good.

"I need some motivation, and I love having Chad as a rival because he's not afraid to say what is on his mind.

"I love and respect that, because that fires me up, too.

"I hate it when people say politically-correct stuff. If you want to beat me, say you are going to beat me.

"I love that fire, that's what every sport needs."

With one big swing and another massive haul, Singapore's first Olympic champion Joseph Schooling proved he is not just a one-trick pony.

The 21-year-old shot an 81 (39 stableford points) to win the golf tournament and also picked up the longest drive gong with a distance of 255 metres as he helped to raise more than $500,000 for the Singapore Swimming Association in their inaugural fundraiser yesterday at the Tanah Merah Country Club's Garden Course.

Schooling, who was a single-handicapper in high school, said: "It was pretty fun even though the start was rough.

"I lost a ball at the first hole but saved that. The first four holes were pretty bad but I played the next five one-under. I had two birdies on the front nine and one on the back.

"It's always a wonderful feeling to be home and I was especially looking forward to the fundraiser because it gave me a chance to also give back for a cause I feel deeply passionate about.

"I would like to thank the partners and sponsors for coming out to play today.

"I'm confident that with everyone's support, we can only continue to excel and make our nation proud."

The fundraiser saw 280 golfers take time out to show their support for the SSA at the tournament and a dinner attended by guest of honour, President Tony Tan Keng Yam, patron-in-chief of the national sports association.

Underlying all three areas is a core focus in skill upgrading and education for coaches, technical officials and sports administrators.

The money will also be used to help strengthen the affiliate clubs' network through development of services and programmes that help nurture aspiring elite athletes.

SSA president Lee Kok Choy said: "The SSA is humbled by the generous contributions it has received tonight.

"We are very encouraged by the continued support shown by our affiliates, sponsors and partners, whose contributions tonight will go a long way in helping us in this journey to achieving our Vision 2020 goals of Singapore as a world class aquatics hub."