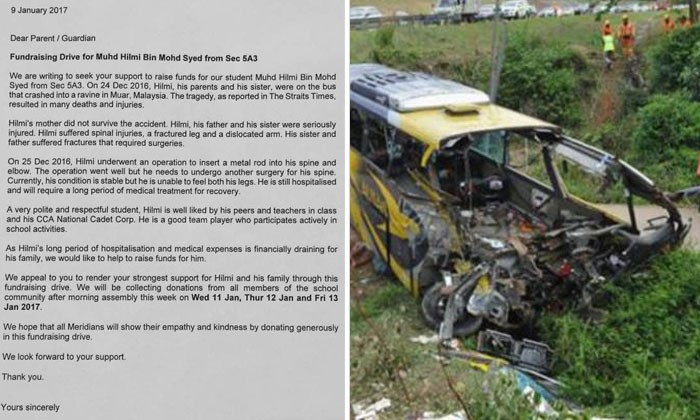 Muhd Hilmi Bin Muhd Syed a secondary 5 student in Meridian Secondary School was involved in a bus crash in Johor Bahru last year on Dec 24 and his school wants to help him and his family get through the ordeal by holding a fundraising drive.

A letter from his school has been posted by Zaidy Nandir on Facebook, stating the student's struggling financial situation and the family's condition.

The bus crash caused Muhd Hilmi a spinal injury, a dislocated arm and a fractured leg.

The bus had crashed into a ravine near Muar, leaving 14 people dead and one of the victims happened to be Muhd Hilmi's mother.

His father and sister survived but also suffered fractures which require surgery.

On Dec 25 last year, Muhd Hilmi have undergone an operation where a metal rod was inserted into his spine and elbow as mentioned in the letter.

Although his condition is stable, he is unable to feel his legs yet and will be hospitalised for quite some time still.

The school wishes to help the well-liked, National Cadet Corp student and will be taking in donation from the public.

If you wish to donate, please pass the cash or cheque personally to Meridian Secondary School on Jan 11 and Jan 12 at any time between 8am to 5pm.

However, on Jan 13, the money needs to be handed over to the family by the afternoon so donations must be received before 12pm.

Those who wants to transfer the money directly to the family can also do so to Muhd Syed's POSB savings account 103-37854-0.