SCDF, SAF, the police and even an MP: Everyone's talking about Pokemon Go craze in S'pore 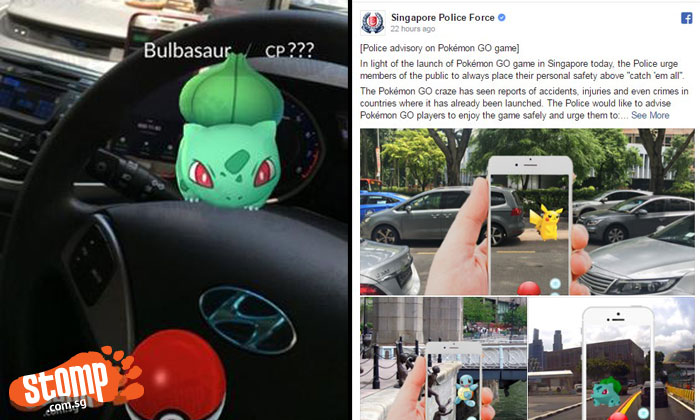 The Pokemon Go craze has officially landed on Singapore's shores on Saturday (Aug 6).

The police released a lengthy advisory on the game, urging players to place their personal safety before "catching 'em all".

"The Pokemon GO craze has seen reports of accidents, injuries and even crimes in countries where it has already been launched," it said on Facebook. It advised Pokemon Go players to not play and drive at the same time, and to educate children to "stranger-danger" at Pokestops.

The popular mobile game was released in Singapore and 14 other Asia and Oceanic countries on Saturday morning (Aug 6), and it didn't take long for other mentions to start appearing on social media.

The Republic of Singapore Air Force (RSAF) was one of the quickest to react, posting on Facebook at around 9.35am. "Seems like our planes are not the only ones flying around the island today!" it said, while also reminding players not to trespass into air bases and camps.

The Singapore Civil Defence Force (SCDF) reminded the public that all SCDF camps and units, including fire stations, are restricted areas and not accessible without clearance.

Similarly, the Army reminded people not to use the camera on their phones in military camps, even in green zones where devices with cameras are allowed. Military camp grounds are also off-limits to the general public without clearance.

Minister of State for Manpower Teo Ser Luck was also quick to share a photo of him playing the game. The Pasir Ris-Punggol MP shared a picture of a Charmander at a hawker centre, writing: "You wait...I queue for my bak chor mee first !"

"We notice that some pokestops are located at/near our waterways. We would like to remind Pokemon trainers to be safe, careful, responsible and not to be carried away with the game," it said, sharing a photo of a Pokestop - a sign at Punggol Park Connector.

Ngee Ann Polytechnic was among those who warned people to be safe.

Savvy companies are also taking advantage of the craze.

Swanky shopping mall Ion Orchard will release hundreds of lures - items that attract more Pokemon - at the mall until Aug 21. The mall is also offering rewards to Pokemon Go players and holding a social media contest with shopping vouchers as prizes.

CapitaLand is also running a campaign that involves players snapping screenshots of Pokemon at its malls and uploading them on Instagram for a chance at a reward.

Excited Pokemon trainers were out in the heartlands by lunchtime in the most casual of attire - all the better to beat the afternoon heat while catching Pokemon.

At a common outdoor recreational area at Bukit Batok East, trainers were scrambling excitedly when they realised a rare Pokemon was in a nearby field.

Property agent Dennis Cheng, 24, said the release of the game this morning was "exciting news" for him.

"It was like a friend just had a baby, and you rush down immediately to see it," he said. "Well I didn't do so immediately, I knew I had to have my breakfast first, but I'm out now catching Pokemon."

Even non-Pokemon fans were jumping in the action, like Mr Choi Hui Teck. "I don't know any Pokemon, but it's an interesting game I wanted to try," said the 43-year old, who works in IT support.

Eager players have taken to social media to share their excitement and gripes.

Pokemon shot to the top of Singapore trends on Twitter, with 1.22 million Tweets as of 1.30pm on Saturday.

People were sharing locations of gyms and joining in the fever.

But there were many who griped that gyms had been taken over by players with Pokemon that seemed to be too strong for so few hours' play.

Many claimed these players had cheated, calling them "spoofers", although some said that they could have returned home from overseas with strong Pokemon.

Related Stories
Stomp Team and Stompers try out Pokemon Go -- and none of us can stop
More About:
pokemon
craze