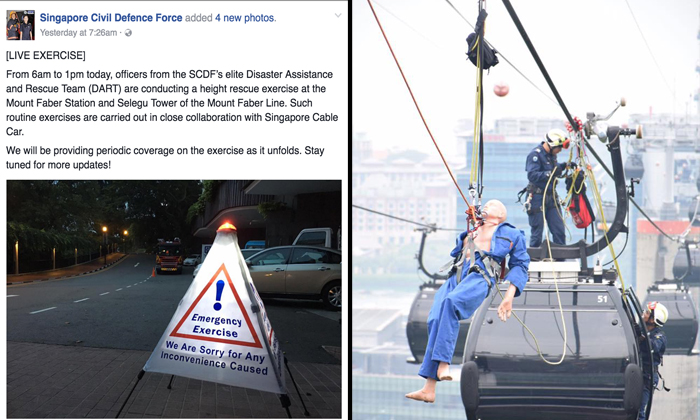 It was a nerve-wracking morning on Oct 6 for Singapore Civil Defence Force (SCDF) as officers from its elite Disaster Assistance and Rescue Team (DART) conducted a height rescue exercise at the Mount Faber Station and Selegu Tower of the Mount Faber Line.

According to SCDF's official Facebook page, such routine exercises are carried out in close collaboration with Singapore Cable Car.

During the exercise that took place from 6am to 1pm, SCDF provided periodic coverage on its Facebook page.

However, due to the morning downpour, the DART rescuers had to brave strong and chilling wind conditions to complete their first mission: To rescue a 'passenger' from the affected cable car who needed immediate medical attention.

As seen in the pictures and video provided by SCDF's Facebook below, the officers are seen in safety harnesses getting the 'stranded passengers', which are dummies, back to safety.

The DART officers then proceeded to scale the 121-meter high Selegu Tower, the highest point of the Mount Faber Cable Car Line.

The exercise ended with the lowering of the last 'affected passenger' onto the deck of an awaiting SCDF Marine Fire Vessel before the 'passenger' was rushed to the shore to receive further medical treatment.

This was also the inaugural participation of the SCDF Marine Command in this cable car exercise.

SCDF said that it was a successful height rescue contingency plan for all the critical points along the Mount Faber Line.

Kudos to the DART rescuers for completing their missions despite unfavourable weather conditions!