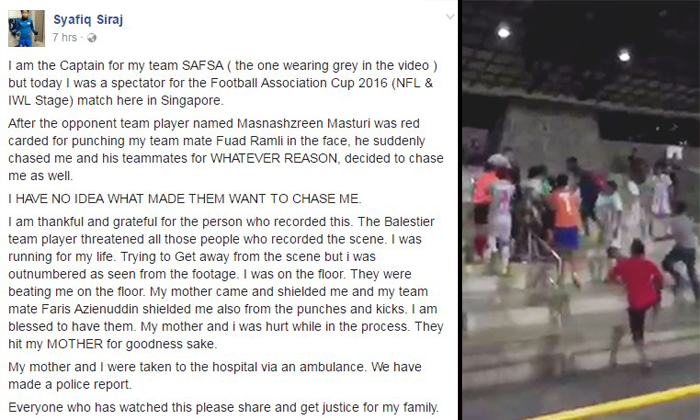 According to a Facebook post dated Oct 2, Syafiq Siraj said that he was assaulted by the opposing team despite being only a spectator.

He also shared a video that shows a large group of men chasing after and surrounding someone, which a bystander had recorded.

Stomper Darius alerted Stomp to Siraj's posting and said: "Saw this Facebook video of a brawl at a match. Wonder what happened."

A second video posted by Facebook user Suresh Nair also shows the men quarrelling heatedly and having to be separated by others. He added that the incident occurred at Bukit Gombak Stadium.

The dispute reportedly took place after one of the players from the opposing team was given a red card for punching Siraj's teammate.

He wrote: "After the opponent team player named Masnashzreen Masturi was red carded for punching my team mate Fuad Ramli in the face, he suddenly chased me and his teammates for WHATEVER REASON, decided to chase me as well."

Recounting the assault, Siraj also said: "I was running for my life. Trying to Get away from the scene but i was outnumbered as seen from the footage. I was on the floor. They were beating me on the floor.

"My mother came and shielded me and my team mate Faris Azienuddin shielded me also from the punches and kicks. I am blessed to have them. My mother and i was hurt while in the process. They hit my MOTHER for goodness sake."

Both Siraj and his mother were sent to hospital and have made a police report.

In his post, the captain also asked for people watching the video to share it and "get justice" for his family.

However, his post appears to have been taken down as of 12pm this afternoon.

According to Suresh, Football Association of Singapore (FAS) general secretary Winston Lee 'assured that "we're looking into this serious matter".'

Related Stories
Men brawl with cabby at Changi Village: Netizen alleges they were told to throw their beer bottles before boarding taxi
10 arrested after brawl at Bugis Street: Fight was due to 'growing resentment' between 2 stallholders
Men brawl at Geylang Bazaar and one guy even has to be restrained
Why are bouncers getting involved in a fight at Pahang Street?
More About:
fight
dispute
argument
attack
assault