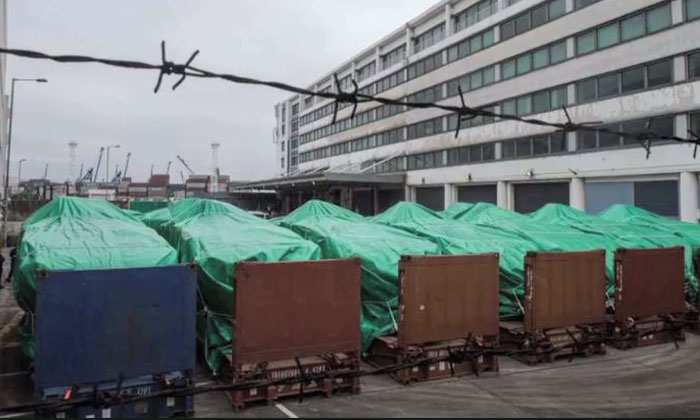 Singapore will not allow any single issue to hijack its longstanding, wide-ranging relationship with China, Minister for Foreign Affairs Vivian Balakrishnan said on Tuesday (Nov 29).

Senior officials on both sides understand that the relationship is "longstanding, multi-faceted, mutually beneficial" and will not allow any single issue to hijack it, he said at the forum at the Ritz-Carlton Hotel.

Dr Balakrishnan added: "I wouldn't overreact to that... we expect commercial providers of services to strictly comply with the law.

"It will be a footnote on how to do things strictly, carefully and by the law. It's not a strategic incident."

Last Wednesday (Nov 23), Hong Kong Customs officials seized the SAF Terrex Infantry Carrier Vehicles and related equipment that were on board a container ship belonging to shipping firm APL. The SAF vehicles were bound for Singapore after a military exercise in Taiwan.

The SAF conducts overseas training in a dozen or so territories and hires commercial shippers to transport military equipment to and from Singapore.

A spokesman for Hong Kong's Customs and Excise Department had told The Straits Times that "suspected controlled items" were found on board the vessel during a search.

On Monday, China said it has made representations to Singapore voicing unhappiness over the incident.

Chinese Foreign Ministry spokesman Geng Shuang said at a regular media briefing in Beijing that Singapore should "strictly abide by the laws of Hong Kong Special Administrative Region (SAR), and cooperate with the SAR government on all necessary follow-ups".

He said: "The Chinese government has always firmly opposed countries that have diplomatic ties with China to have any form of official exchanges with Taiwan, including military exchanges and cooperation.

"We asked that the Singapore Government strictly abide by the one-China principle," he added.

At the forum, Dr Balakrishnan said Singapore has believed in the One-China policy since it established diplomatic relations with China 25 years ago and this has not changed.

He said: "If you are truly close, there will be things you disagree about from time to time.

"Fortunately or unfortunately for Singapore, we are very transparent, we call a spade a spade. It doesn't mean we are shifting our position or deliberately trying to poke people in the eye."

Replying to a question from the audience about how Singapore will respond to the Chinese Foreign Ministry's remarks that the Republic should adhere strictly to the One-China policy, Dr Balakrishnan said Singapore does not conduct foreign policy by reflex.

Singapore's training arrangements with Taiwan are long-running and are not a secret, he said, pointing to the large number of Singaporean men who have trained there since 1975.

"We all know, and China knows, that we've had special arrangements with Taiwan for a long time, and what we are doing there is no longer a secret," he said.

It would be a "surprise" if China kept silent about this arrangement, he said, but added that he has told his Chinese counterpart that Singapore values its longstanding relationships.

"And at the same time, you know full well where I stand, that I believe in One China and we will not deviate from that."

On an issue like the territorial disputes in the South China Sea, Singapore's own circumstances and history inform its position on the importance of freedom of navigation and overflight, and of international mechanisms to resolve disputes, he said.

Related Stories
Man loses 30,000 yuan in gust of wind but bank workers and passers-by help him pick it all up
Chinese woman's breasts shrink and 'drop' to her stomach after chest enlargement injections
Man in China buys luxury car with coins and small notes -- leaving staff to count them for 12 hours
China
relationship
relationships