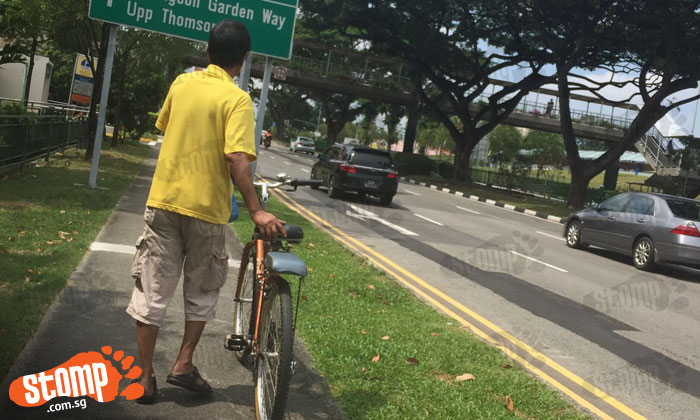 A Stomper had an unpleasant encounter with a man on a bicycle this afternoon (September 10).

Her e-scooter had run out of battery so she was pushing it home along Yio Chu Kang Road near Serangoon Swimming Complex.

When she saw the man cycling towards her she pushed her e-scooter aside to allow him to cycle pass.

However, he fell down despite this.

She rushed over to help him as his bicycle was on top of him but instead of thanking her, he started to verbally assault with expletives.

"I ignored what he said and continued to hold on to his bicycle until he was up then continued to push my scooter.

"He continued to verbally attack me after getting up.

"I was like, 'excuses me? I pushed my e-scooter aside so you cycle, is it wrong of me to do that?'.

"He replied me saying, "no la, no you not wrong. You are right ok."

"I replied him, 'I did not say or assume I was right, I was asking a question'.

"He was speechless for a minute and continue to attacked me by saying, 'f**k you la, go back to your country.'"

The Stomper was shocked and lost for words at the man's ignorance and behaviour.

Despite her silence, the man continued to verbally abuse her.

He then stopped cycling and started pushing his bicycle.

The Stomper thought that he had injured himself but realised that he was doing it on purpose to block her way.

"I got really mad, and decided to push my e-scooter to the side of the grass (on the left).

"He started to make comments about it again by saying, 'oh, now you know how to move to the side already ah? go back to your country la.'

"I ignored him and took my phone out.

"He saw that my phone was out and decided to comment again by saying, 'yeah call police, call your father call them come down la.'

When they had reached a nearby coffee shop he blocked her way again to which she angrily asked why.

The man then replied with a smirk, "Why? I want to park my bicycle, cannot is it? Your grandfather road ah? Your father road ah?"

The Stomper couldn't help raising her voice at him and asked, "Why do you have to be so ignorant, stop being ignorant!" while pushing her e-scooter against his bicycle.

According to the Stomper, he then became "immature and childish", by doing the same, pushing his bicycle and hitting her e-scooter.

The Stomper was disappointed that several people were looking on but nobody stepped in or told him to stop.

"I've been living in Singapore for 10 years and I have met rude local but none as bad as this man.

"I am a huge fan of Stomp and have followed other incidents of prejudice against foreigners here.

"We are all humans, what is wrong with being a foreigner?"

Related Stories
Woman tearfully breaks down after meeting racist passenger on bus: 'You are Black, go sit in front!'
'Stop asking me if I am Singaporean': Indian-Singaporean pens column about racism
Property agent scolds client for being 2 minutes late -- but mistakenly sends messages to her
More About:
rude
inappropriate
racist