Rogue lorry driver continually drives on wrong lanes, forces vehicles to give up right of way and overtakes them 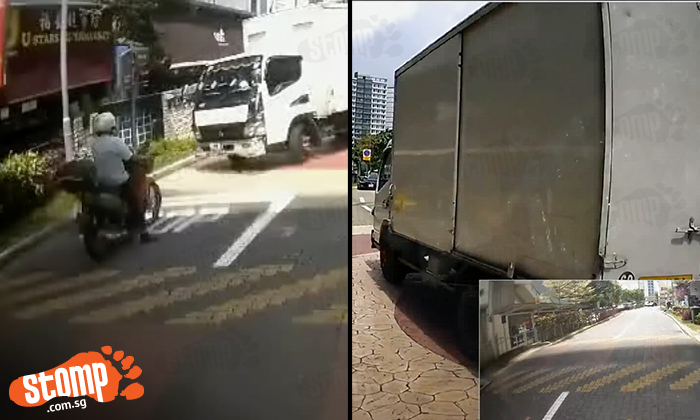 Stomper Marcus was left infuriated when a reckless driver of a lorry forced his way into a roundabout at 21 Punggol Street at 12:55pm today (Dec 5).

He submitted a footage of the incident recorded by his car’s camera.

In the video, the white lorry can be seen going onto the wrong lane as soon as it turns in, but the driver refuses to budge even when face to face with another motorcycle that was turning out.

Ultimately, the motorcyclist was forced to give up and moved onto the other lane.

Marcus, who was ferrying an ill passenger then turned onto another path to allow his passenger to alight.

Just as he was turning out, the same truck sped past, still on the wrong lane, almost causing a collision in the process.

After making the turn, Marcus drove towards the entrance, only to be overtaken by the lorry, which quickly overtook his vehicle, and nearly caused an accident.

The worst part? The lorry was still on the whole lane when it overtook his vehicle.

“This person drives with total disregard for the safety of others.

“How can such a driver be allowed on the roads?”

Take a look at the video below.

Related Stories
Your life means nothing to these drivers: Watch how they race illegally on Orchard Rd
Watch how S'pore tour bus travels over 120km/h on Malaysian expressway
Do you know this lousy driver? "She hit our parked car at The Centrepoint carpark -- then simply drives off"
accident
reckless lorry driver
wrong lane