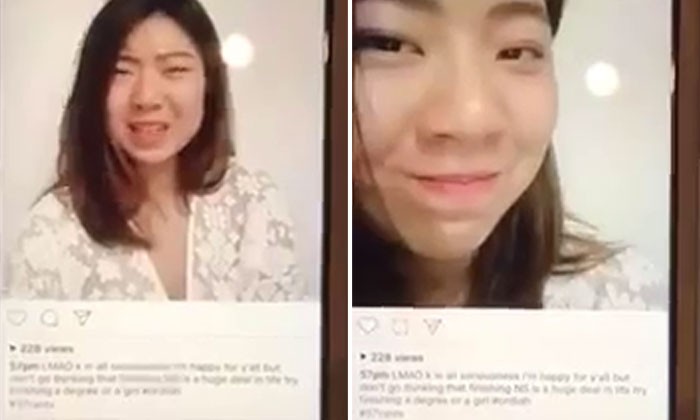 A female student from Raffles Junior College (RJC) uploaded a video on her Instagram in which she mocked Singaporean guys for complaining about serving National Service (NS) on Wednesday (Dec 7).

In the short video that she deleted after receiving negative feedback, she told guys to stop b****ing about NS and how many days they are left with ORD.

"I mean, yes, NS was difficult. You survived two years without an IC but there are like millions of immigrants who survived an entire life without an IC."

Many Singaporeans felt offended after watching her video and commented negatively on her video.

She then deleted the video and posted an apology.

"Don’t you just sometimes think, I am an idiot."

"Yes, because I feel it all the time. I admit, I’m not mature enough, I’m not wise enough, and I’m not understanding enough."

"A lot of people are angry at me and believe me when I say this, so am i. I hate that I’ve injured the feelings of many people due to my own negligence. And to that, I apologise."

"Without a hint of excuse or defence, I apologise to anyone whom I’ve directly offended, for being unthoughtful and for taking so long to apologise."

"I never meant for whatever I said to be downright offensive, but it was my fault that I failed to realise it was inappropriate."

"And I thank all my friends for correcting me. I think a lot of people want to seek revenge; they want to see terrible things happening to me because I’ve done something that has belittled them.

"This is a natural tendency and I’m not defending myself in any way, because I know I was wrong, but it shouldn’t be brought upon the communities that i come from."

"I am entirely responsible for the mess I’ve created, and no one else had a part to play in this."

"The most important thing right now is to very openly admit that I was wrong and issue my apologies to whoever who demands it, and then grow from this gross mistake."

"I’m pushing myself to be more analytical and sensible. Honestly that was some dumb shit I said lah and whoever who hates me for this has every right to."

"All done in bad taste. Y’all haters don’t worry I’m like part of you, I’m really hating myself too like wtf really I was a dumbass."

"I’ll be less of an idiot in the future. This will be one of my top most embarrassing mistakes of my entire life I really need to slap myself."

"Probably should’ve said all these earlier but I’ve been having dancing nonstop. Gosh."