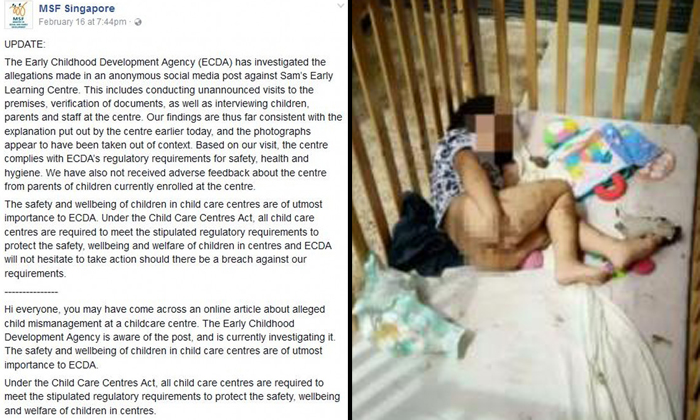 A childcare centre in River Valley has denied allegations that it had neglected children and fed them rotten fruit.

Stomper May had alerted Stomp to photos circulating online of children allegedly being ill-treated at Sam's Early Learning Centre in Jalan Mutiara.

An anonymous netizen, which the childcare centre alleges is a former employee, posted the photos on WeChat on Feb 14.

In a statement to the media on Wednesday (Feb 22), Sam's Early Learning Centre in Jalan Mutiara, said it believes the photos were posted by the unhappy former employee who has since returned to China.

Mrs Samia El-Ibiary, the centre's director, said that the photos were taken last year and they "do not represent an accurate picture" of its operations.

The Early Childhood Development Agency, which oversees childcare centres in Singapore, also responded with a statement yesterday (Feb 23) that it has investigated the allegations.

ECDA said that its findings were consistent with the childcare centre's explanations, and that the photos were taken out of context.

The photos included that of a bare-bottomed child who had defecated and had faeces smeared all over his body in a cot.

The WeChat user wrote in Chinese that the child had even 'dug' out the faeces from his butt and eaten it.

In response, the director explained that the toddler had a habit of pulling his diapers off while having bowel movement during his nap time.

"On this particular day that the photo was taken, the teacher had called upon the cleaner to assist in the cleaning up of the child. The cleaner was asked to help wash the toddler while the teacher held him and distracted him," she said.

One picture showed children lying on the floor without mattresses, to which the centre said the students were doing "stretching and breathing exercises" after lunch.

The WeChat post also had a photo that alleged that rotten fruit was served to the children.

But Mrs El-Ibiary said that fruits are purchased twice a week and rotten fruit are disposed of.

The WeChat user also alleged that the teachers threw away milk powder that parents had left the staff to feed their children with.

Mrs El-Ibiary clarified that the milk powder had spilt onto the kitchen counter and was being discarded for hygiene reasons.

Here is the ECDA's statement in full:

"The Early Childhood Development Agency (ECDA) has investigated the allegations made in an anonymous social media post against Sam’s Early Learning Centre.

"This includes conducting unannounced visits to the premises, verification of documents, as well as interviewing children, parents and staff at the centre.

"Our findings are thus far consistent with the explanation put out by the centre earlier today, and the photographs appear to have been taken out of context.

"Based on our visit, the centre complies with ECDA’s regulatory requirements for safety, health and hygiene.

"We have also not received adverse feedback about the centre from parents of children currently enrolled at the centre.

"The safety and wellbeing of children in child care centres are of utmost importance to ECDA.

"Under the Child Care Centres Act, all child care centres are required to meet the stipulated regulatory requirements to protect the safety, wellbeing and welfare of children in centres and ECDA will not hesitate to take action should there be a breach against our requirements."