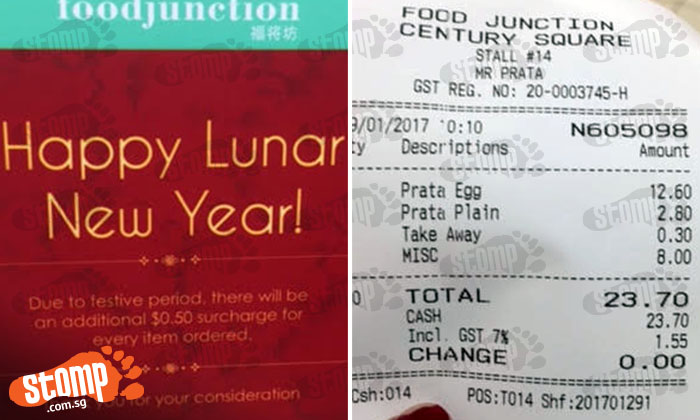 Patrons at Century Square's Food Junction were left outraged after having to pay surcharges for their food and drinks -- on top of what the items originally cost.

Stomper Celine and Eugene sent in separate accounts of how much their meals there today (Jan 29) amounted to.

"It didn't occur to me that when the official notice displayed at the cashier said '$1 surcharge per item', it really meant $1 more for every prata.

"My order was six egg pratas and two plain pratas.

"Might as well go for fast food, where even delivery costs $4 only.

He also patronised another stall where he bought a breakfast set that consisted of bee hoon and coffee for $4.90.

However, despite it being a set, the items were broken up and had separate surcharges imposed on them: $1 for the bee hoon and $0.50 for the coffee.

Stompers. do you think this surcharge is reasonable due to it being Chinese New Year or simply redundant? Is the amount imposed way too much?

Related Stories
What is this? Surely $4.20 herbal chicken soup doesn't look like that
Are you sure I ordered this? Stomper orders hor fun and is disappointed by skimpy meal
expensive
food
food center
overpriced food
Food Junction
controversy