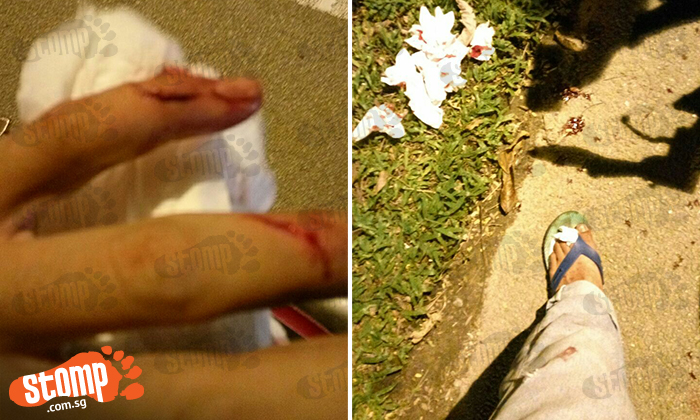 Stomper Frances was left wih cuts on his hand and feet after he hit a BMW while trying to avoid a car that changed lanes dangerously.

The Stomper was riding his motorbike along SLE, towards BKE, near the exit of Woodlands Ave 12 at 9/20pm yesterday (Dec 2).

He was on the second lane, while the car that caused the accident, a blue Toyota, was on the first lane.

Frances say the blue Toyota was cutting into his lane when he sounded the horn.

Despite this, the Toyota continued into his lane, forcing him to swerve onto the next lane, where he hit a white BMW.

"The driver who caused the accident did not stop, and just went off into Woodlands Ave 12," said Frances.

The Stomper was given treatment by the personnel in the ambulance that arrived on the scene, and traffic police and police officers also took his statement.

"Hoping anyone who was around or saw and has the evidence of this reckless driver on camera could help me," said Frances,