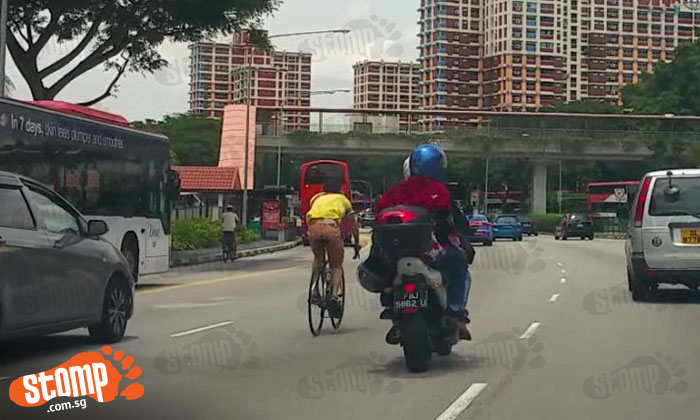 Stomper Alex was alarmed when he saw a cyclist weaving in and out of traffic along Jalan Eunos yesterday afternoon (Oct 9).

The cyclist was not wearing a helmet and had a pair of headphones on.

"He openly cut across the lanes without care and concern, inconveniencing road users.

"Other drivers were forced to give way to him."

Alex shared a video with Stomp of the cyclist riding alongside vehicles in the faster lane and not keeping to the left as most cyclists do.

It is unimaginable what could have happened if the fellow road users around him were unable to respond in time against his irresponsible acts.

"He wouldn't have been able to so care-freely ride away if a car was not able to give way to him in time when he cuts into lane as he so wishes.

"His selfish act and road behaviour utterly disrespects and disregards all fellow road users and the cycling community.

"This uncouth behaviour of one selfish black sheep is not indicative or representative of the cycling community in Singapore and cannot be excused or condoned.

"It is even an insult to the courteous habits that the cycling community is trying to promote to create a safer environment for sharing the road."