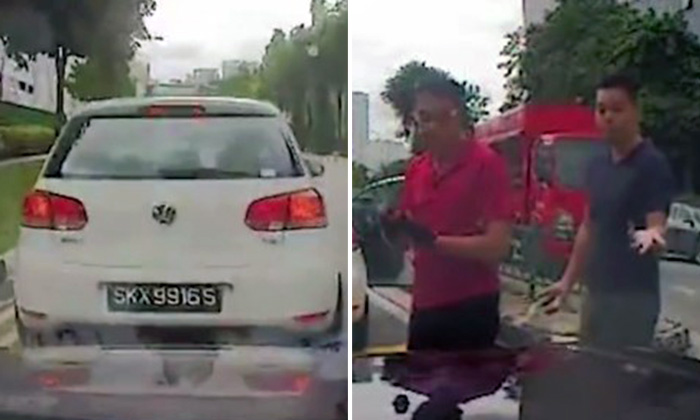 A viral video of an accident has left netizens questioning if the incident was real or staged by a driver for insurance claims.

The clip, posted on Roads.sg and credited to Rach, shows a driver travelling along Toh Guan Road on June 17.

A Volkswagen cuts in front of the above-mentioned driver from a turn, and jams on his brakes a few seconds later.

The other driver manages to stop in time and avoids an accident by mere inches.

As the Volkswagen driver speeds away, the other driver stops for few seconds before going on his way.

However, the Volkswagen driver suddenly changes lanes and stops there.

The other driver is unable to stop in time on this occasion, and crashes into the Volkswagen.

The impact leaves the back bumper of the Volkswagen dented, and the engine cover of the other vehicle gets damaged as well.

Both drivers are seen stepping out of their vehicles to argue and take photos of the accident.

Both Roads.sg's caption and many netizens have accused the Volkswagen driver of staging the accident for insurance claims.