Real or staged? Guy gets hit by car after dashing across road at Sin Ming Drive 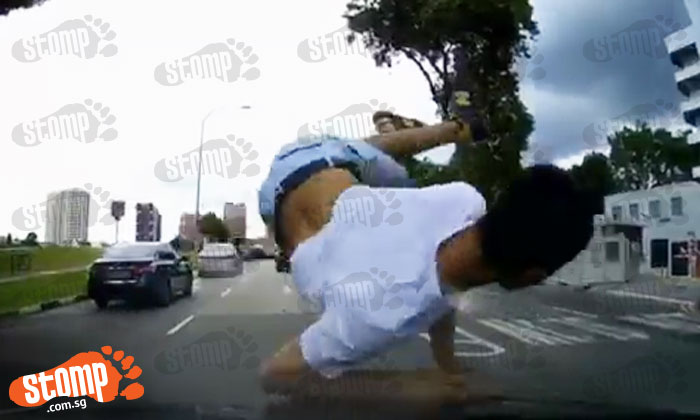 Stomper Wei Ng was driving along Sin Ming Drive on yesterday (Oct 12) when a pedestrian ran across the road without looking for oncoming traffic and got hit by his car.

It all happened so suddenly that the Stomper did not have time to react to the situation at all.

After the accident, Wei Ng immediately exited his vehicle to render assistance to the pedestrian who was lying on the road and groaning in pain.

A passerby assisted by calling for an ambulance while the Stomper called the police.

He was advised by a Traffic Police (TP) officer to make a road accident report after the pedestrian was conveyed to hospital.

Fortunately, the Stomper had a dashboard camera installed in his car that captured the incident.

Another driver was willing to be the Stomper's witness and sent him video footage from his car's dashboard camera.

Both of them lodged their reports at Thomson Neighbourhood Police Post.

The Stomper shared both videos to Stomp and expressed concern at the possibility of the accident being staged.

In the videos, the pedestrian can be seen standing around as if waiting for something before unexplainably running across the road without looking.

"I was informed that I cannot claim from the pedestrian as pedestrians do not have insurance coverage. Said the Stomper:

"I have to either pay for my own damages, or claim my own insurance.

"I was informed the damages will cost at least $1k and above.

"Thus, I've decided to claim my insurance, and risk an increase on my next year's insurance premium, despite that this is not my fault."

The accident had left dents on his car's bonnet and vehicle registration plate as well as several paint work scratches on his front bumper.

He added that he had contacted the pedestrian's boss who informed him that her employee had a broken thigh bone and was nursing a concussion at the hospital.

Wei Ng is appealing for advice from fellow motorists:

"I'm not sure if this is a scam by the pedestrian or his pure carelessness. For those who had accidents with pedestrians before, please advise."