Rat found in mutton soup: What Jalan Besar stall has to say 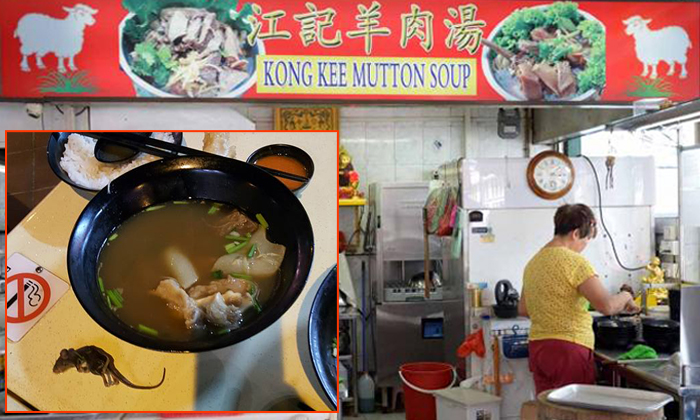 The owner of Kong Kee Mutton Soup has responded to an incident in which a patron said he found a dead rat in his mutton soup from the stall on Sep 5.

The diner, Quek Yong Pheng, had shared his 'bad experience' on Facebook, accompanied by photos of the rat which Stomper Melvin alerted us to.

When contacted by Stomp, Quek said that the stall owner had offered him and his friends a refund of $42.

They were also told that the rat might have "dropped down from the wire above."

The National Environment Agency (NEA) later told Stomp that they are investigating the incident. A spokesperson said:

"The National Environment Agency (NEA) is aware of the Stomp report and is currently investigating the incident.

"We will take the necessary enforcement actions against any parties found responsible for rat infestation, or creating conditions favorable for harbourage or proliferation of rats."

The Straits Times visited the stall on Tuesday afternoon (Sep 6) but there were no rats in sight.

The female stall owner, who declined to be named, said that they practise high standards of hygiene.

"We clean the place three times every day, when we open, at midday, and at closing time. I never see any rats around, so I also don't know where it came from."

She explained that when she cooks her mutton soup, the ingredients are placed aside in bowls, with the large pot of soup beside it.

"If there's a rat, I would have noticed it while preparing the ingredients," she said.

Kong Kee Mutton Soup, located along Sam Leong Road in Jalan Besar, has been running for 20 years and is said to never have had a record of rats.