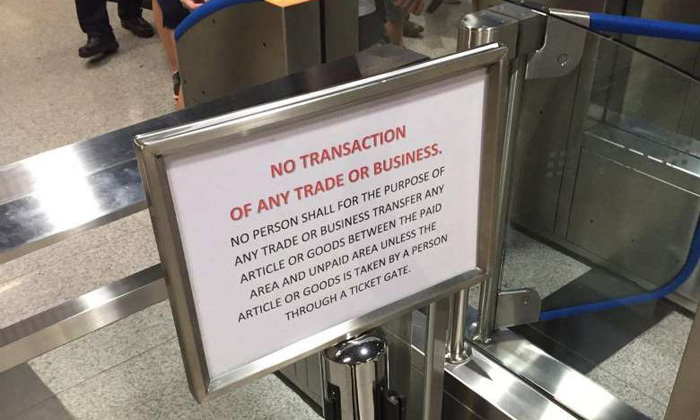 Tucked away among the better-known rules of riding the subway - no eating, no drinking, no smoking - is a Rapid Transit Systems Regulations prohibition against selling goods across the fare gate.

This rule has been in place for decades, but just in case you had not heard of it, at least one train station now has a notice in place for commuters.

Full-time national serviceman Xavier Lur was at Beauty World station on the Downtown Line when he spotted a sign with a quote from the relevant law: "No person shall for the purpose of any trade or business transfer any article or goods between the paid area and unpaid area unless the article or goods is taken by a person through an automatic gate."

Mr Lur, 22, told The Straits Times that he had been unaware of the rule and that this was the first such notice he had seen in a train station.

Mr Lur said: "I don't see a strong reason as to why train operators have to resort to such a rule, as it doesn't affect the safety of commuters."

He added that he had witnessed goods changing hands in stations in the past, and did not think that the rule would deter such behaviour.

Ms Tammy Tan, senior vice president, corporate communications, SBS Transit, explained in response to a Straits Times query: "For commuter safety and security, we do not encourage loitering in our premises particularly at stations with high passenger flow.

"The notice has been put up at the Beauty World Station as we have noticed increasing numbers of commuters loitering to conduct what appears to be transactions in our premises."

This is not the first time commuters have expressed surprise about the ban on business deals in MRT stations.

In 2009, Rediffusion deejay Gan Yeok Thiam, who witnessed an errant seller receive a warning from SMRT staff, told The New Paper: "We're living in difficult times now. Shouldn't we be more compassionate towards people who are just trying hard to make a simple living?"

Another member of the public wrote to The Straits Times in 2014 calling on the authorities to clarify rail regulations and to publicise the rules more widely.

In both cases, the Land Transport Authority explained that the rule exists to discourage people from using public transportation for commercial goods delivery, since bus and train services are meant for carrying passengers.