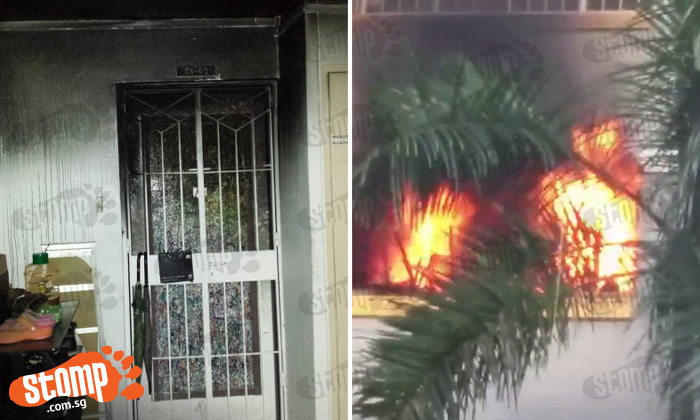 Flames were seen raging out of a fourth-storey flat at Block 740 Pasir Ris Street 71, allegedly caused by a charging electric bike's battery.

Stomper Eric sent in photos of the aftermath of the flat, blackened and destroyed, which he spotted at 11pm.

Stomper Paigel shared a video his friend, who lives opposite the block, took. According to him, there was an explosion.

The Straits Times reports that it was possibly caused by a charging electric bike battery, and that it blackened the Pasir Ris flat's living room on Friday (July 8) evening.

The Singapore Civil Defence Force (SCDF) said it was alerted to the fire at Block 750, Pasir Ris Street 71 at 6.24pm. No one was injured, it added.

Neighbour Madam Hasnah Sidin, 63, told The New Paper (TNP) that she and her daughter rushed down from the fourth storey when they were alerted to the fire.

The fire was "like lightning" said Madam Hasnah. Her daughter called the SCDF.

The Singapore Civil Defence Force (SCDF) said it was alerted to the fire at Block 750, Pasir Ris Street 71 at 6.24pm. No one was injured, it added.

Flat owner Andy Nini, an aircraft painter, 44, was at work when the fire broke out. He received a call from his sister at 7pm, TNP said.

His son, two daughters and a maid escaped their five-room flat.

When he and his wife Nancy, 44, a radiographer, returned, they were in tears at the sight of their blackened and burnt living room.

Mr Nini thinks that an electric bicycle battery he left charging may have led to the fire.

Deputy Prime Minister Teo Chee Hean, who is Member of Parliament for Pasir Ris-Punggol GRC, heard about the fire while on his way to a Meet-the-People session and visited the Nini family.

"Many helping hands at Blk 750 this evening due to fire from electric bike battery being charged at home. Thankfully no one injured," he said in a Facebook post.