Race against time to raise $200,000 for toddler's life-saving operation at NUH 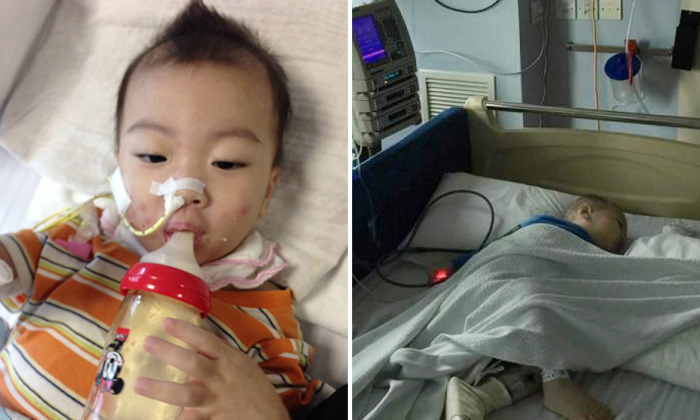 Every time 20-month-old Tran Nguyen Khang sees his doctors waving at him from the door of his ward at the National University Hospital (NUH), he bursts into tears, anticipating yet another round of injections and blood tests.

It is a scene his mother, Mrs Dam Thi Hai Hoan, 34, witnesses regularly. "He's very traumatised," she said in Vietnamese. "There are times when he just starts crying and shouting, 'Stop taking blood! No injection!'"

Khang was recently diagnosed with Hyper IgM syndrome, a rare genetic disease which results in his immune system not working.

As patients with Hyper IgM syndrome are prone to recurrent and life-threatening infections as well as other complications, his parents are racing against the clock to raise funds for a bone marrow transplant that will hopefully save his life.

A crowdfunding appeal Mrs Hoan put out at the suggestion of his doctor has raised some $95,000, about half of what he will need.

Khang's condition was not immediately noticeable. For the first 16 months of his life, he was a lively, energetic boy like any other. When he first developed a light fever four months ago at the family's home in Thai Nguyen province, Vietnam, Mrs Hoan was not concerned.

"I thought it was just a minor illness, like a sore throat or virus children catch," said the mother of two, who works as a bank teller in Vietnam. She took him to a local family doctor, who prescribed antibiotics.

After three unsuccessful courses, Mrs Hoan knew something was wrong. She took him from hospital to hospital, but his fever gradually worsened. She became anxious and impatient.

"Everyone was telling me that it is very strange and abnormal that after a very high dose of antibiotics, his condition didn't improve," she said.

Desperate for answers, she and her family pooled their remaining resources, packed their bags and travelled to Singapore's NUH along with her husband, 36, who works for a company that provides mobile communication networks, to seek help.

After several trips back and forth between the two countries, Khang was diagnosed with hyper IgM syndrome.

"I couldn't comprehend the problem at the time," Mrs Hoan recalled, "When I learnt what it was, my whole body felt weak."

The family was devastated to learn that the only cure was an expensive bone marrow transplant to replace Khang's faulty immune system with the donor's working one.

Anxious to raise the estimated $200,000 needed and encouraged by the success of similar campaigns, Mrs Hoan launched a campaign on crowdfunding site, GIVEasia.

Donations trickled in slowly at first but the campaign gained momentum after Khang's story appeared in the Chinese evening newspaper, Lianhe Wanbao.

Dr Alison Lee, associate consultant, Division of Paediatric Allergy, Immunology and Rheumatology at NUH, told The Straits Times that doctors are currently starting the matching process to find a suitable donor for Khang. Doctors believe that his seven-year-old sister, Tran Huyen Thu, is most likely to be a match.

Mrs Hoan said she is very grateful - not just for the donations, but also for the kind words of encouragement she has received from donors and other concerned people.

"All of them lighten both the emotional and financial burden that we are bearing," she said.

"I feel like I have the strength to continue fighting this illness with little Khang."