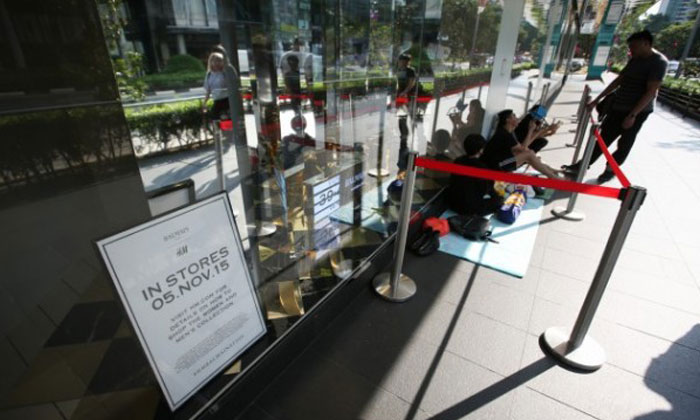 Early birds eager to get their hands on the upcoming Balmain x H&M collection have set up camp outside the H&M flagship store at Orchard Building.

While the collaboration between French fashion house Balmain and the Swedish fast-fashion giant will launch worldwide only on Thursday (Nov 5) morning, the line here started at about 7pm on Monday (Nov 2).

Retail assistant Michelle Kwek, 26, and her friend were first in line with a floor mat and foldable tent.

The Jurong West resident, who saved at least $2,000 for this shopping spree and took four days of leave just so she could start queueing early, gushed: "His designs are very detailed. The fall/winter 2012 collection was my favourite. Rousteing's stuff hasn't always been affordable, that's why this collaboration (with H&M) is a dream come true."

The 30-year-old Rousteing's designs have been donned by celebrities such as Kendall Jenner, Kim Kardashian and Rihanna.

The 109-piece collection will be available here only at the Orchard Building and Ion Orchard H&M outlets from 8am on Thursday.

They range from $24.90 for a brass ring to $899 for a sequinned dress, much cheaper than the thousands of dollars that Balmain pieces typically fetch.

The Straits Times understands that advanced queuing is not allowed at the Ion Orchard mall.

As of 6pm on Tuesday (Nov 3), there were more than 10 people in line outside the flagship store. Queue poles had been set up and some early birds were spotted erecting camping tents.

Law graduate Amanda Sun, 24, arrived at about 5.30pm, armed with her sleeping bag, picnic mat, wet wipes, iPad and battery pack. She has been queueing for H&M's designer collections for the past five years, both in Singapore and in London where she studied.

"It's a huge difference in London because it's usually winter and not many people come so early. It's more of a mad rush to get the items here," said Ms Sun, who has her eyes set on an embellished pearl beaded jacket retailing for almost $700.

She admitted that not everything she buys will be for herself. "At least five friends have asked me to help them buy stuff," said Ms Sun.

Others in line view the staking out as more of an investment.

Student Peng Jun Wuen, 21, described it as a "business opportunity".

"I take orders from people who don't have the time to wait in line. I charge a $100 commission for each piece," said Mr Peng, who is taking turns to wait in line with his older sister.

He plans to buy only two T-shirts for himself, but has received eight other orders from two "customers" on marketplace app Carousell.

Public relations manager for H&M Singapore, Ms Abby Wee, said the safety of customers is a "top priority" during the launch.

"To ensure the safety of our supportive fans, we have trained security guards as well as store managers on standby... to handle contingencies," she said.

When the doors open on Thursday, customers will be ushered into the store in groups of 30, Ms Wee added. Each group will have 10 minutes to buy as many styles from the collection, with each customer limited to one piece per style per colour.

"This 10-minute window does not include trying on the clothes and we also ensure sufficient trained staff are stationed inside the shopping area as well as the changing rooms to provide quick assistance and guidance to our customers," said Ms Wee.

This is the 11th year that H&M has launched collaborations with designers and brands, which include Karl Lagerfeld, Stella McCartney and Alexander Wang.

Last year, more than 600 customers stood in line at Orchard Building ahead of the H&M x Alexander Wang launch, with some camping for almost 48 hours.

While the wait can be long and tiring, showing up early also has its perks.

Said Ms Kwek: "The H&M staff take good care of us. They drop by every now and then to give us water and curry puffs."