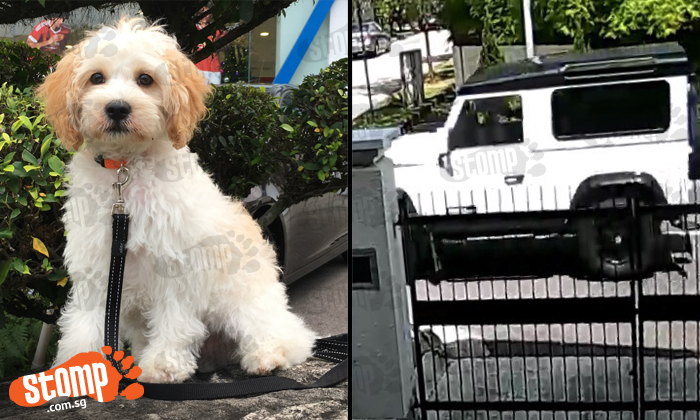 Stomper J alerted Stomp to the plight of her friend’s family, whose 5-month-old Cavoodle escaped from their home at Elite Park Avenue on Jan 8 and was then allegedly taken by a couple driving a white Land Rover.

According to the Stomper, the male puppy, named Cookie, escaped from the owner’s place while she was sending her kids to a nearby tuition centre.

At 12.25pm, the owner received a call from her parents informing her that Cookie was nowhere to be found. She immediately rushed home to search for Cookie with her helper and even went to the nearby cemetery, but to no avail.

The family subsequently appealed for help on Facebook, made a police report, and contacted the Agri-Food and Veterinary Authority of Singapore (AVA) as well as the Singapore Society for the Prevention of Cruelty to Animals on Jan 9.

It was on Jan 12, four days after Cookie went missing, that a witness contacted them. She said that she spotted Cookie near their home at around 12.30pm on Jan 8.

According to the Stomper, the witness said that a white Land Rover then drove by and asked her if the dog was hers. After she replied that it wasn’t, a lady in her twenties alighted and put Cookie in the booth of the vehicle before the car drove off.

The family managed to get CCTV footage of the incident after appealing for help from their neighbours. They showed the pictures of the Land Rover to the witness on Jan 13, and she verified that it was the vehicle that Cookie left in.

“Owner sincerely urges for Cookie’s return. Owner promises not to pursue as long as Cookie is returned back to them but if they insist to keep Cookie, legal action will be taken and the owner is not going to take this lightly.”

Cookie is a small-medium sized dog with light brown ears and a light brown patch on his body. He has a black nose, black eyes and was last seen wearing an orange collar. Cookie is also microchipped and registered with the AVA.

Kindly contact us at stomp@stomp.com.sg or via WhatsApp at 9384 3761 if you have any information about the missing dog.

Related Stories
Help! Have you seen my lost dog called 'Puppy' that went missing in Yishun?
Is this your dog? She was found at Blk 352 Ang Mo Kio
Is this dog yours? Schnauzer found at Teban Gardens
lost dog
lost and found
help
missing