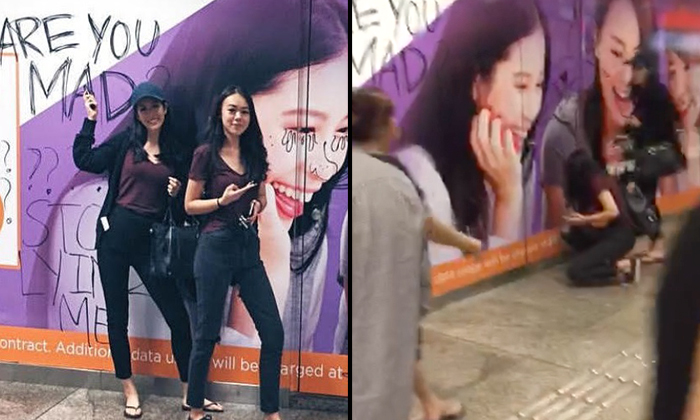 He took a video of the incident and sent it to Stomp.

In the video, the girls were seen to be defacing an advertisement for a company called ‘SGMobile’, and posted videos of their daring exploit, even tagging the Singapore Police Force (SPF).

According to Gary, the two girls posted a photo of themselves with their finished production on Instagram, accompanied with the caption in bold:

“Something big is coming your way, yeah a big ass scam?

“Y’all can check out our artwork at Bugis MRT. LOL.

“Send us pictures of you guys with our mural. #LIMPEHMRT”

The two girls also circled a section of the advertisement that showed ‘3GB for $40’ and wrote beside it, “Are you crazy?”

Some of their followers, concerned for the pair’s safety, have questioned whether their actions were legal, while others theorised that it was just a promotional act.

Stomp contacted Youtiao666 today (Mar 7) and a representative for the internet personalities confirmed that the incident was part of a public service campaign, with Circles.Life.

Circles.Life, Singapore’s fourth postpaid operator confirmed that the 'SGMobile' ads on XCO Media+ assets were part of their branding campaign to "highlight the frustration of data-savvy Singaporeans with the limited amount of data available in mobile offerings today".

The one-day activation led to Circle’s Life announcement of New Plus option, 20GB for S$20.