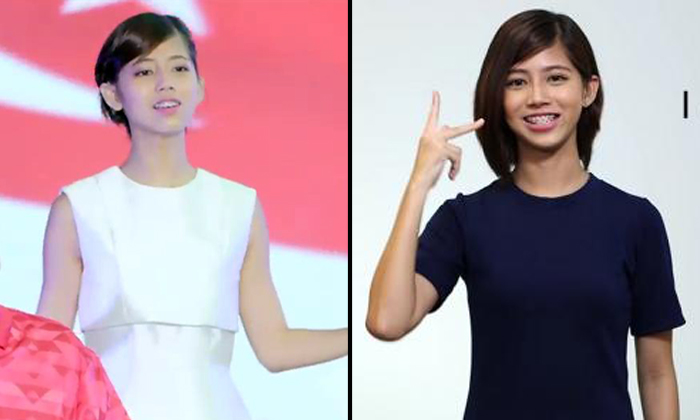 The National Day Parade may be over, but that doesn't mean that netizens have stopped talking about it.

It seems that one participant caught the eye of several Singaporeans, including blogger Alvinology, who published a blog post on Ms Neoh Yew Kim, a 22-year-old sign language instructor.

Dressed in a white dress with her hair pulled back neatly, Ms Neoh's elegance and sweet smile captured the hearts of many who were watching the performance.

An instructional video uploaded on YouTube featuring Neoh song-signing to Home and Count on Me, drew positive comments. One netizen commented that Ms Neoh was "pretty".

There is even a forum thread discussing Ms Neoh's good looks on Hardware Zone.

Neoh, who wears a hearing aid and cochlear implant, told The Straits Times through a sign language interpreter that song-signing enables those who can't hear to "enter the world of music and allows the able-bodied to join in with us in that moment".

According to the daily, the office support worker who is employed in the banking sector, is also a volunteer with various organisations such as the Singapore Association for the Deaf.

The inspiring performer also performed at the opening ceremony of the 8th ASEAN Para Games in Singapore last year.

In a September 2014 post, the blog published a photo of a cheerful Neoh posing candidly at Singapore Polytechnic.

She told the photographer that she suffered from hearing loss when she was just six months old, and attended school with other hearing impaired students as a child. However, when it was time to enter secondary school, her disability became clear and began to overwhelm her.

The struggle to cope hit hard, and she wanted to blame someone for the problems she had at school.

She said in the Humans of Singapore post: "My parents weren't around because they're divorced and live separately, so I couldn't blame them. But I live with my sister and grandmother, and my sister has the same problem, so I became angry and started blaming her instead - I thought that maybe she bit me and I had the same problem!"

Eventually, Neoh began to overcome the obstacles with the help of friends, and by brushing up on her lip-reading skills.

Imperfection, she told Humans of Singapore, does not mean a person is worth less than others.