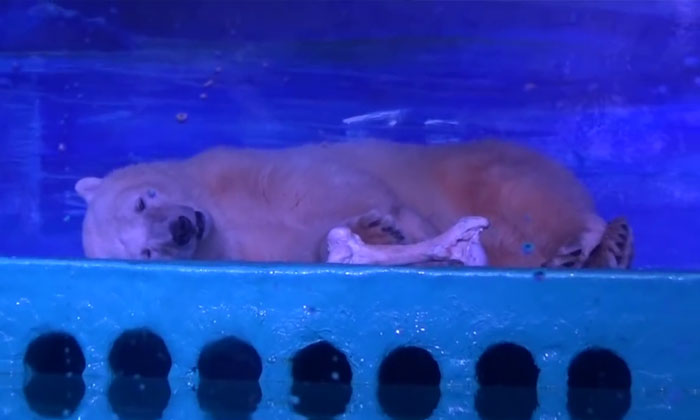 A total of 150,000 people have signed a petition to free the 'world's saddest polar bear' which is in a Guangzhou mall and living in poor conditions.

According to Shanghaiist, the unnamed and "dispirited" polar bear is currently kept in the Grandview Aquarium on the second and third floors of the Grandview shopping mall.

The polar bear is reportedly kept in the aquarium for visitors to take wefies with, but is constantly annoyed by people tapping on the glass to get a good picture.

One woman called the polar bear a "lazy ass" after her efforts to get a response from the napping bear had failed, reported Shanghaiist.

Besides the polar bear, the aquarium which houses 500 species of animals also has two arctic wolves, six beluga whales and five otters which live in a cage covered in faeces and infested with insects.

According to South China Morning Post, the beluga whales are about two metres in length each and cramped into a small tank about four metres deep, six metres wide and 15 metres.

A minute-long video of the polar bear lying in the aquarium was posted on YouTube by animal welfare group Animals Asia in March this year.

The video is part of the petition calling for the aquarium to close, and the group hopes to garner a total of 300,000 signatures.

"We are calling on the Chinese public not to attend this attraction. We are calling for it to be closed down. This is a bear that suffers for what? For selfies? For shopping?" he added.

On Sunday (July 10), a 30-year-old polar bear in Argentina died from a blood circulation imbalance after spending 20 years in captivity at the Mendoza Zoo.

In 2012, Arturo's partner, Pelusa, died of cancer and he became depressed after losing his mate, reported New York Daily News.