Man who locked himself with boy, 2, in Sembawang flat for 17 hours arrested after officers break down door 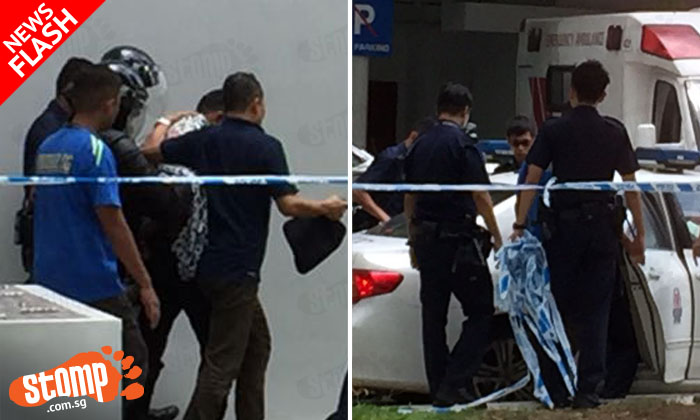 At 12.03pm on Sep 28, officers from the Special Operations Command (SOC) broke into the unit and arrested the man. The boy was rescued and is currently in safe hands.

The officers had climbed through the window to enter the rental flat, which was the fastest way in.

The two-year-old boy was unharmed throughout the entire operation.

The 39-year-old man was arrested for wrongful confinement and suspected drug-related offences.

Stomp understands that the boy's mother has also been arrested for drug-related offences.

Police will work with the Ministry of Social and Family Development (MSF) on ensuring the well-being of the child and investigations are ongoing.

A man has locked himself in a flat on the fifth storey of Block 462, Sembawang Drive for over 12 hours this morning (Sep 28).

The Police are still in negotiations with the 39-year-old man as of 10am and the incident is ongoing.

The Police said on their Facebook page that the incident took place after the man had a dispute with the two-year-old boy's mother. He is reportedly a friend of hers.

They added that "the man refused to open the door to police" and that "officers from Ang Mo Kio Division, Crisis Negotiation Unit and Special Operations Command are managing the incident."

According to The Straits Times, a resident in the area said he heard the loud cries of a child from the unit at around 8pm. The boy is understood to be unharmed.

The Police have advised the public to stay away from the cordoned-off area of the block and to comply with instructions from officers on the ground.

"As of 11.30am, negotiations are ongoing to ensure the safety of the boy. Members of the public are advised not to speculate on the incident."

Stomp understands that the man was not armed.

There is a mixture of negotiators and SOC officers at the scene.

Check out the 360-photo of the scene here.

Look at the scene in the videos below.