Police reports made after woman offers attraction tickets at discounted prices then goes 'MIA': Stomper paid her $1,200 in July 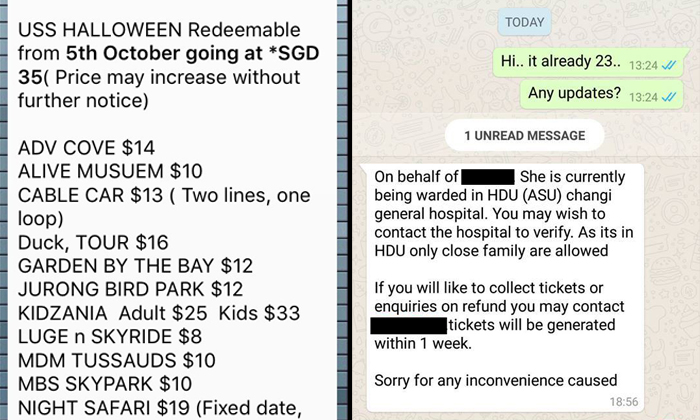 Stomper SG Concern bought multiple tickets to local attractions from a woman and paid her $1,200 in July -- but has not gotten his purchase even after nearly five months.

The woman, known as 'SA', had been advertising her deals on Facebook and through WhatsApp. She offered tickets to local attractions such as Universal Studios, Marina Bay Sands SkyPark and Night Safari, as well as for overseas ones including Malaysia's Legoland and Hong Kong's Ocean Park, at extremely low prices.

A friend had introduced SA to Stomper SG Concerned, who then purchased the tickets in bulk from her.

However, he has not been able to collect his purchase from the seller even though it is already December, as she always has a reason for not being able to meet up.

Said the Stomper, who made a police report on Nov 19:

"She would sell a few tickets to some buyers, who believe that she is really getting them cheap from an unknown supplier (which she made up on her own). As buyers developed trust,the volume of orders became bigger.

"Usually, the collection of the tickets will take around two to three months later and according to her, there is no expiry, you can get the tickets any time even after a year or more.

"It is supposed to just like an investment where you buy her tickets now at such a low cheap price, and eventually those ticket prices will be higher in the future.

"But when the time comes and when buyers want to collect the tickets, she would give excuses like being busy with work and a wedding, being sick and even getting hospitalised."

It seems like Stomper SG Concern is not the only one who had such an encounter with SA.

Stomper Joni also sent Stomp screenshots of her experience with SA, as well as a photo of the latter's medical certificate which stated that she was on hospitalisation leave.

Lai, who wrote about the incident on Facebook, posted pictures of the police report that she made on Dec 6 too.

"She will ask you to confirm the number of tickets you want to buy, then get you to transfer the money to her account first then email the redemption tickets to you.

"Once the transfer is done, she will give excuses like, 'emailed already', 'supplier emailed wrongly', 'miscommunication', etc. But when asked for a refund, all the standard excuses will pop up.

"I was stupid enough not to check the validity just because a friend recommended her to me."

She told Stomp in a phone interview that after writing about the incident online and having her post go viral, someone claiming to be a SA's relative had contacted her on Dec 7, in hopes of settling the matter amicably.

Lai, who also gathered screenshots of other buyers' conversations with SA and shared them with Stomp, has since received a refund of her $330 from SA's relative.

According to SG Concern, the matter is under police investigation.

A Facebook post by SA states that she is 'unable to comment further' due to 'pending investigation' and advised those affected to make a police report instead.

Related Stories
At least $14,600 swindled from victims of new Facebook scam in S'pore: Police
Beware of this ZoukOut ticket scam: At least 23 victims cheated of $3,400 in total
Don't fall for them: Here's how online love scammers in S'pore are upping their game
Woman transferred at least $85k to help 'boyfriend' she met on FB -- and was promised $1.2 million in return
Look out for scammers on social media platforms and dating websites
scam
seller goes MIA
cheap ticket scam
text